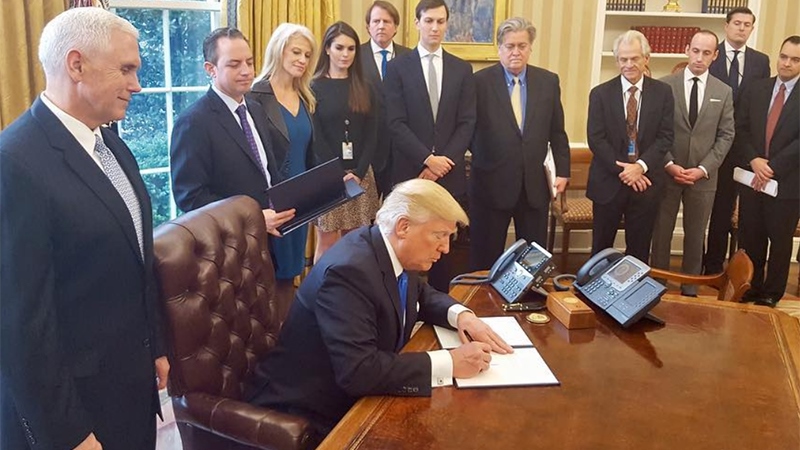 President Trump today signed into law the FY 2019 National Defense Authorization Act (NDAA), which clocks in at $717 billion in spending for the Pentagon. After months of negotiations, hearings, and compromises, the must-pass defense spending bill was signed during a visit by President Trump to Fort Drum in upstate New York this afternoon.

“We must protect those who protect us,” Trump said. “When our service members are in uniform, it is our obligation to ensure that they have the finest equipment, the finest training, care, and resources— better than any military on earth.”

Included in the lengthy bill are a few nuggets of spending and legislation of particular interest to the Federal technology crowd.

How to handle Chinese telecommunications equipment and service providers ZTE and Huawei was a point of contention on the Hill. The House and Senate went back and forth throughout the legislative process, with the Senate proposing much harsher bans against private and public-sector purchases of ZTE and Huawei products, and the House proposing a milder ban. The final piece of legislation includes the House’s provision, which bars the Federal government from using products manufactured by ZTE and Huawei or contracting with the companies and those that do business with them.

Sen. Jack Reed, D-R.I., spoke on the Senate floor following the bill’s final passage earlier this month. “We have done, I think, what we could do to ensure that our national security is not compromised in the future by ZTE or Huawei equipment,” he said.

Sen. Ben Sasse, R-Neb., succeeded in getting his Cyber Solarium Commission included in the final NDAA. The Commission is a 14-member, public-private panel designed to develop clear consensus and actionable strategy to protect and defend the United States in cyberspace.

“The Cyber Solarium Commission, included in this year’s national defense bill, will lead a top to bottom review and build a cyber doctrine to protect our interests,” Sasse said when the final bill was passed in Congress. “This is a critical step but, frankly, Washington is late to the game and we’re going to need to hustle.”

Trump’s signature on the legislation today marks the first on-time passage of the NDAA since 1997.