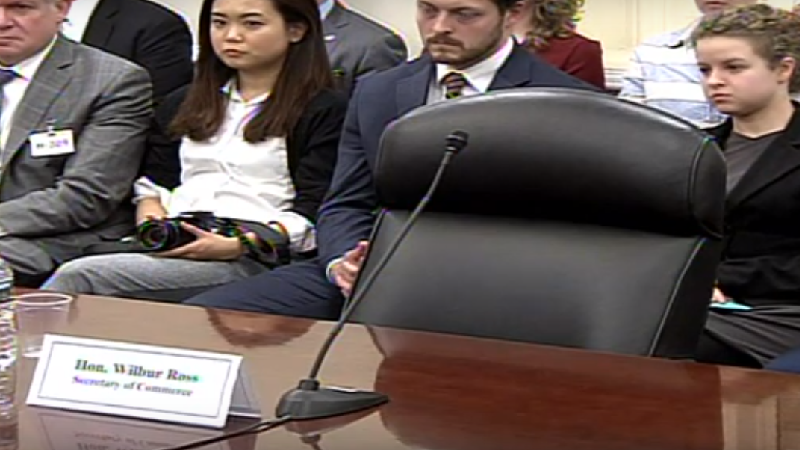 “The Subcommittee apparently intends to recognize an ‘empty chair,’ thereby foregoing the opportunity to ask meaningful questions about the Department’s budget and operations priorities,” he said.

The subcommittee did as Ross said they would – they sat before an empty witness chair saved just for the Commerce Secretary, who did not specify why he could not testify today.

Instead of reviewing the proposed FY2020 Commerce budget totaling $12.2 billion, some subcommittee members fumed over what they called Ross’ irresponsibility for choosing not to appear before them, while others chose to defend Ross and insisted the subcommittee hear the panel of Commerce bureau chiefs instead.

“This hearing was supposed to be about accountability and how we can support small businesses, manufacturers, expand our economy, but instead we get nothing,” Rep. Matt Cartwright, D-Penn., said.

The 2020 census, which the Commerce Department funds, was a topic that members especially focused on. Many noted that the census is significantly underfunded and asserted that the Census Bureau is ill-prepared to conduct next year’s decennial census. That’s notable from a technology perspective since the bureau aims to have a majority of its responses registered online next year, and the Government Accountability Office and former bureau heads have said the it does not have the technology or security in place to securely do so.

“The American people deserve an open and transparent debate on the census because the census funding affects both Democratic and Republican districts in every single part of the country,” Rep. Grace Meng, D-N.Y., said.

Other representatives were concerned about cuts to economic administration grants, which provide funding and technical assistance to economically distressed communities, and termination of the manufacturing extension program.

However, Reps. Steven Palazzo, R-Miss., and Tom Graves, R-Ga., said the subcommittee should accept the Commerce representatives Ross sent, arguing they would be qualified to answer any of the subcommittee members’ questions.

Rep. Ed Case, D-Hawaii, rebutted and said that Ross is the senior leader of the department and that having people below him answer for his decisions leaves room for gaps in accountability.

Ross’ absence and Serrano’s decision to adjourn the hearing without accepting testimony from Commerce representatives marks another moment of tension between the legislative and executive branches in a moment in which the Democratically controlled House is reviewing the proposed White House Budget.

It’s unclear when the subcommittee will review the Commerce budget or if Ross will testify when that time comes.