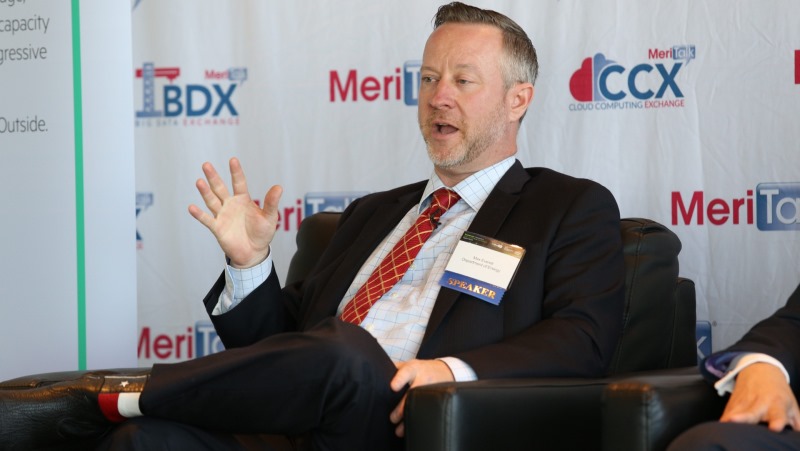 Max Everett, CIO at the Department of Energy, addresses the Roadmap: Tomorrow's Data Center in a Cloud-Driven Digital World audience on Oct. 24, 2017, in Washington, D.C. (Photo: David Keith for MeriTalk)

Agencies are looking at ways to secure the edge of their systems in order to support a more mobile workforce.

“The edge is where the mission happens,” said Max Everett, CIO of the Department of Energy, at Hewlett Packard Enterprise’s Roadmap: Tomorrow’s Data Center in a Cloud-Driven Digital World event, produced by MeriTalk, on Oct. 24. “We’re in the midst of a transformation. It’s modernization with a plan.”

Everett said that edge networks at the Energy Department are particularly important because they support the National Labs, which are located across the country, rather than centralized in D.C.

“They’re dealing with things that glow in the dark or go boom so we sent them a little farther away,” Everett said.

Everett said that the agency is interested in optimizing the networks around the electric grid, because employees who work to secure the grid can’t access certain locations in bad weather. When they do have access, they need the best capabilities.

“It is critical for them to not only capture data but to do analytics right there in the field,” Everett said.

The Energy Department is looking into places in its network where it can afford to have risk. Everett said the government isn’t risk averse, but they don’t want to be the first to try something new.

“Once everyone sees it going, they’ll all want to jump on,” Everett said.

“It’s a sad state of affairs that we’re even having conversations about some of these things,” Everett said. “Modernization in government traditionally has been, we wait until something is end of life and we replace it two years after that.”

Alen Kirkorian, division chief of Innovative Strategy and Security at the Office of the Chief Architect at the State Department, said that one of the agency’s problems is making sure that data is secure even in overseas data centers that serve overseas employees. Kirkorian has been exploring potential tools that the agency needs for employees to work securely on the edge.

“Our infrastructure at a lot of these countries is not where we want it to be,” Kirkorian said. “We are beholden to local infrastructure.”