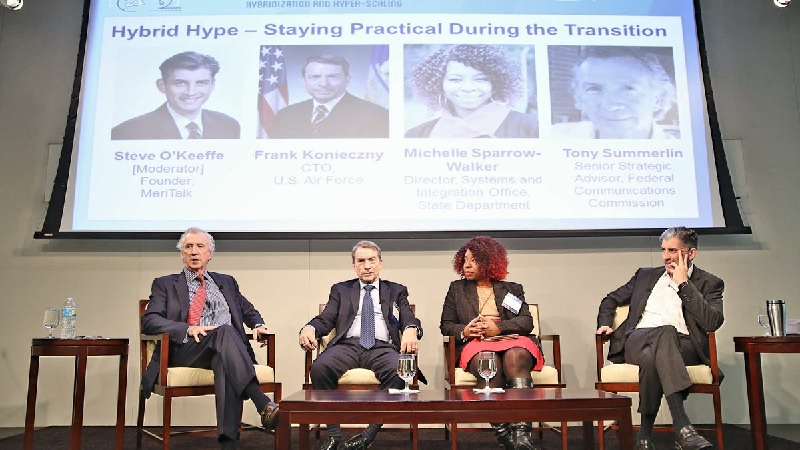 The U.S. Air Force is talking to Congress about starting a multiyear, replenishable fund for cloud computing, according to Frank Konieczny.

Cloud computing would be widely adopted by Federal agencies if the congressional funding process changes to accommodate IT modernization. Agencies have trouble predicting the budget they’ll need for cloud computing because of the fluctuating nature of certain applications.

An IT Modernization Fund, endorsed by Federal CIO Tony Scott, would’ve been housed under the General Services Administration; however, some agencies official dislike this plan.

“Giving GSA money is like giving the Greeks money to have the Olympics,” said Tony Summerlin, senior strategic adviser for the Federal Communications Commission, speaking at MeriTalk’s Cloud Connect 2016 event on Nov. 2 in Washington, D.C. “It’s just a ridiculous exercise.”

In some agencies, cloud adoption is occurring whether or not it’s cost effective.

“We don’t ever talk about cost savings,” said Michelle Sparrow-Walker, director of the systems and integration office at the State Department. “It’s difficult to truly show savings.”

“We’ve taken a step back to make sure we have a more organized approach to moving to the cloud,” Sparrow-Walker said.

The FCC took a different approach because most of its data is already public, according to Summerlin. The FCC uses public cloud through five FedRAMP-certified providers, but the agency also had to issue seven waivers for companies to bypass the FedRAMP certification process because of the time is takes.

“[Companies] have no interest in spending a year and a half at GSA and paying someone they don’t know or don’t respect to look at their servers for a year,” Summerlin said.

For Silicon Valley technology companies, Summerlin said, “It’s like going to Harvard and transferring to [Northern Virginia Community College] and them not taking any credits.”

Summerlin chooses software through executive sponsorship and the FCC’s acquisition officer because users often can’t narrow down what they need out of the software.

“I tell people as we’re doing it. I don’t let them inform the process,” Summerlin said. “Don’t tell anybody and do it as fast as you can.”

The FCC has had to move to the cloud on a budget that has remained flat.

“We basically point to people who are inefficient and not doing anything with their money and we take it,” Summerlin said.

The Air Force transitioned to a hybrid cloud almost seamlessly, according to Konieczny.

“Nobody knew that we switched from an on-site to a commercial cloud. That’s how good it was,” Konieczny said. “The hardest part was actually moving data back and forth between the cloud.”

Konieczny said that the Air Force is concerned with internal and external cybersecurity threats to its data. The next area in which cloud providers need to continue to focus their energy is cybersecurity.

“We’re afraid the data is going to be changed without us knowing it,” Konieczny said.