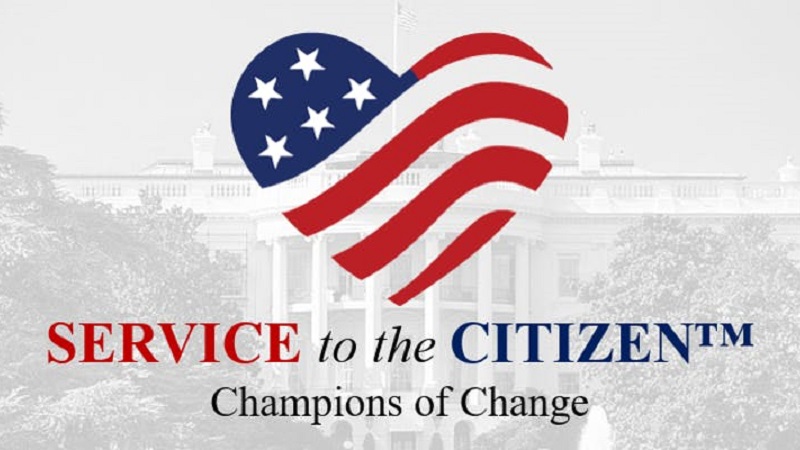 Federal government officials and IT industry partners were recognized for outstanding efforts in progressing and improving Federal digital services at the Service to the Citizen Awards event today.

Martha Dorris, founder of Dorris Consulting International – the organization that hosts the annual awards – spoke about the importance of the award winners and their commitment to leveraging technology to improve customer experience, as well as the collaborative efforts that underpin award-winning performance.

“The government delivers to the public,” Dorris said. “These people make change happen. The job isn’t easy and isn’t one that the government can do alone. Government in partnership with industry work to simplify and change the lives of the public. It’s a team effort.”

Two key honorees at the ceremony were Rep. Ro Khanna, D-Calif., and Sen. Rob Portman, R-Ohio, who received the Legislative Executive of the Year award for their work in introducing the 21st Century Integrated Digital Experience Act (IDEA), which was signed into law last December. The bipartisan legislation aims to modernize Federal government websites and forms to make them more accessible for users who try to use government digital services.

Portman, who credited Khanna for being the primary force behind the 21st Century IDEA Act said it was important that government website information is “accurate, consistent, reliable,” as well as accessible for individuals with disabilities. Portman cited President Abraham Lincoln’s phrase, “by the people, for the people,” and said the 21st Century IDEA represented the importance of service to the citizen.

“Words are timeless – ‘for the people’ – he had no idea that the 21st century would be so interconnected, and the digital economy would have been the way which most people communicate,” Portman said.

Khanna, whose district includes portions of California’s Silicon Valley,  said he began pursuing the 21st Century IDEA Act when he saw how far U.S. government digital platforms were behind those of big American tech companies.

Expanding upon the 21st Century IDEA Act, Khanna called upon the government to focus more resources on U.S. technological advancement. He cited investments by China, which has put “all their trillions of dollars in their technology, in their infrastructure,” and said that the United States should do the same.

“Investing in the National Science Foundation, in DARPA, in the National Institute of Health, in our defense labs and our universities, making sure that we lead the technology future of the 21st century – that, in my view, is the entire moment for whether our values will continue to help shape the world,” he said.

While Portman and Khanna were honored for their legislative efforts, Mariela Melero – director of the Office of Citizenship and Applicant Information Services in U.S. Citizenship and Immigration Services – received the Lifetime Achievement for Delivering Service to the Citizens award for the work she has done throughout her time in office.

Namely, Melero led efforts to create a digital self-help portal and tools for immigrants applying for citizenship to better manage their own applications and cases. She also oversaw creation of myUSCIS, an online one-stop-shop portal for immigration information, as well as “Emma,” the Department of Homeland Security’s first interactive virtual assistant that answers user questions in both English and Spanish.

Officials and offices within Department of Veterans Affairs (VA) also earned awards. VA Under Secretary for Benefits Paul Lawrence received the Government Executive of the Year award for his efforts to increase veteran engagement with the Veterans Benefits Administration, to gather feedback on and create partnerships with the Veteran Service Organizations, and to expand veteran access to their medical records electronically.

Other VA entities, such as the Veteran’s Experience Office, and their respective officials also received awards for cross-agency customer experience efforts. Teams from the General Services Administration, Office of Management and Budget, and United States Digital Service also received these awards.