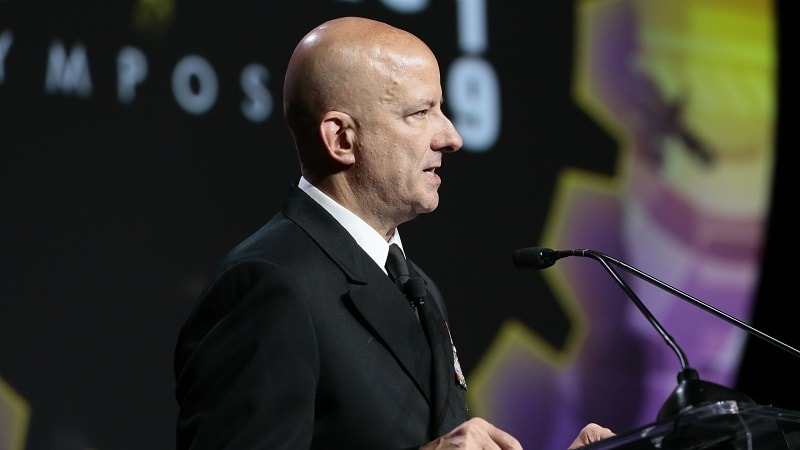 Vice Admiral Robert Sharp, director of the National Geospatial-Intelligence Agency (NGA), said today that modernizing the agency’s IT infrastructure and hastening the adoption of automation and artificial intelligence technologies are key pillars of NGA’s “Mission Tomorrow” objectives that the agency has set out in its 2025 strategy.

Speaking at the GEOINT Symposium on June 3, Sharp explained tweaks he made to NGA’s 2025 strategy since he took over as head of the agency earlier this year. He said the updated strategy is “not radically different” than what had been in place, but that the new version ties more firmly into larger defense and intelligence policies.

The IT modernization goals fall squarely in the last of those four areas, and into the agency’s primary duty of providing “timely insight into opportunities for, and threats to, our national security,” Sharp said.

“NGA needs to mitigate the element of surprise by improving its ability to understand the world – and anticipate future events. So, we have to ensure our people and our partners have what they need to conduct our mission not only today, but tomorrow,” he said.

To accomplish that, Sharp said NGA is “committed to modernizing our IT infrastructure, collection services, networks, training and business practices.” He added, “We’ve got to keep up with the deluge of data that’s on the horizon – or in some regards, already here.”

To the industry-heavy crowd at the GEOINT Symposium, Sharp said “If you’re looking for an area to partner with us, I highly recommend you focus on Artificial Intelligence, Automation and Augmentation – what we call AAA.”

“Our goal is to partner with machines so that we can make best use of the exponential growth in volume and source of data, letting machines do what machines do well and analysts do what analysts do even better – think critically and solve problems.”

In an interview following his speech, Sharp declined to address specific budget implications of the move to modernize IT and develop further advanced technologies, but said he was committed to “fight for resources” from Congress to accomplish those aims, and has proposed a “phased” approach to tackling the modernization mission.

He also said NGA is “taking advantage of commercial capabilities … That’s a growth area for us.” Sharp said his agency has joined in AI-development efforts with the Defense Department, and that it sees automation as a way to drive cost savings.

“I want omniscience on demand,” he declared. “I want the people developing sensors and services to help solve our problems.”

No less important among the agency’s top goals, Sharp said, are the agency’s efforts to improve on the personnel front. He said the agency’s “first priority is taking care of our greatest asset – our people,” and that NGA is taking a range of actions to improve recruiting and retention, including boosting its annual intern additions to about 300 this year, up from 56 in FY2015.

“And we’re concentrating on creating the environment where our people want to stay on the team – where they’re properly resourced, where their families are taken care of, where we’ve set the conditions for them to contribute, to grow, and to succeed, where barriers preventing them from ‘being all they can be’ are removed,” he said.

Finally, Sharp emphasized the value of obtaining data from a large number of international sources, and said NGA has at least “some relationships” for that purpose with about 70 countries. He said agreements for data collection, at least on the map-data level, are usually brokered directly with foreign governments, and then may spread out to “friends of friends” of those governments as well.

“The more we can work at expanding that the better off we will be,” he said.

On a more personal level, Sharp said he was “thrilled and excited” to head NGA after about 100 days on the job. “I come to work filled with joy each and every day.”