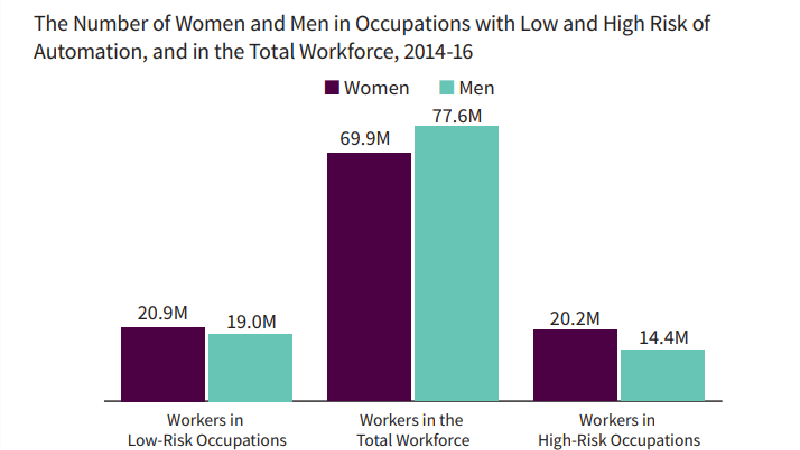 Amid research and reports concerning the impact automation and artificial intelligence (AI) will have on the American workforce, the way in which technological change will endanger individuals’ jobs on a gendered basis remains largely unexamined.

The Institute for Women’s Policy Research (IWPR), however, released a report last week that brings gender to the center of automation’s effects on workers, and it finds that women–particularly women of color–may have more to lose occupationally than men as technology advances.

The report notes that the U.S. labor market is largely segregated by gender. Women are less likely than men to work in factories, and only five percent of truck drivers are women, for instance, while 70 percent of office and administrative work is done by women.

Because of gender segregation in the American workforce, women workers are concentrated at extreme ends of the automation spectrum, according to IWPR, since women are overrepresented in both the lowest risk jobs–such as child and elder care and education–and highest risk occupations–like secretaries or administrative assistants–of automation.

This disparity has notable consequences for women, since they compose 47 percent of the American workforce but are 58 percent of people at the highest risk of losing their jobs to technology, according to the study.

First, the study finds that automation will likely threaten jobs like clerical and secretarial positions that tend to pave middle class incomes for many women. While men face the risk of losing their jobs to automation, these positions are overwhelmingly low-skill–such as truck driving or manufacturing work–and therefore men who work in middle or higher paying jobs will likely be less affected by automation.

Not only is the gender disparity in job risk to automation distinct, but the disparities grow further among women between racial groups than among men. Hispanic women, for instance, will likely be the most impacted by increasing automation.

“Hispanic women are the most likely of all groups of women to work in [high-risk] occupations (32.2 percent) while White men are the least likely of all to do so (16.5 percent),” the study states, noting that Hispanic women are especially likely to work in manufacturing and transportation–job industries that have routine, low-skill positions that are subject to automation displacement.

Additionally, even among women take on jobs that require digital skills – which will be marketable in an age of automation – the study also found that women face a 41 percent gap with men in earnings returns on digital skills.

Given the study’s findings, IWPR argues that policies that emerge to address technological change need to be designed in a gender-aware manner. IWPR recommends that companies should expand access to improving and developing skills for workers, as well as bolster jobs and income security as technology continues to shape the workplace. The study also suggests that prioritizing new opportunities in tech and improved earnings for women will help foster job equity.

“Automation will create unprecedented opportunity to dramatically speed progress toward gender, racial, and ethnic equality,” IWPR writes. “Intentional efforts to apply knowledge and technology to tackle inequality, along with efforts to improve efficiency and productivity, are essential to building a future of work that expands opportunity across the labor market.”