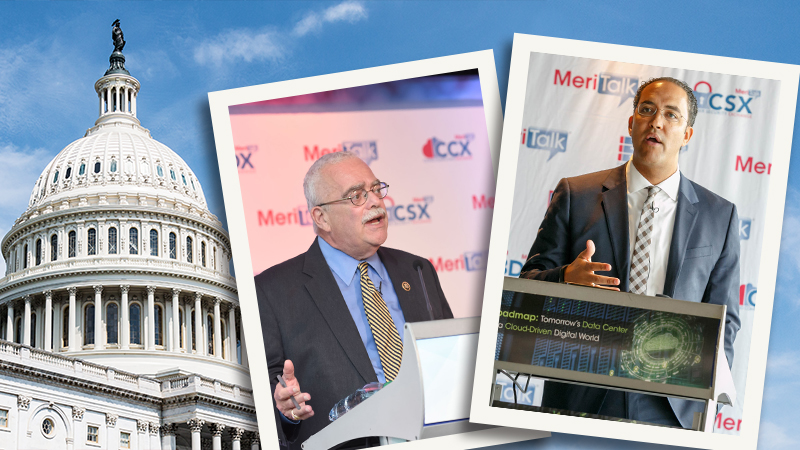 While their committee assignment paths have diverged since Democrats took control of the House of Representatives in January, Reps. Will Hurd, R-Texas, and Gerry Connolly, D-Va., pledged Wednesday night to continue their close working relationship on Federal IT issues both on the policy and funding sides of the equation.

Speaking at MeriTalk’s FITARA Awards ceremony on Wednesday night, Hurd recounted his close association with Connolly on Federal IT issues and in particular formulating the FITARA (Federal Information Technology Acquisition Reform Act) Scorecard that grades Federal agencies on key IT goals, and said he planned to keep his hand in the game through the appropriations process.

“When Gerry is upset, he will circle an agency on the scorecard, hand it to me, and I will continue the grilling in the Appropriations Committee,” Hurd pledged.

“Then when agency heads are sitting in front of Appropriations … It will always be my first question, the question about the FITARA scorecard,” he said.

For agency heads needing to study up on FITARA, MeriTalk’s new FITARA Dashboard has all the details of how agencies are doing on their IT modernization quest.

“The partnership we are going to have on this will really change peoples’ behavior,” Rep. Hurd said, adding that scorecard is aimed at putting pressure on Federal agency heads and finance chiefs to make IT modernization a high priority.  Agency CIOs, he said, “are the champions and the winners in all of this.”

“The nice thing about FITARA is that one of the two authors is still here,” said Rep. Connolly last night. “The preceding framework legislation is [the 1996] Clinger-Cohen [Act], and right after that passed, Clinger retired from Congress and Cohen became Secretary of Defense, so there was nobody invested.”

“As you can see, we’re not only invested, we’re burrowing in,” said Connolly of the continuing interest of both himself and Rep. Hurd.

In his recent interactions with House Appropriations staffers, Rep. Hurd said that only one staffer appeared to be familiar with FITARA, but that other staffers “furiously wrote down in their note pads FITARA … I had to spell it for them”

In addition to recounting his close relationship with Rep. Connolly on FITARA, Hurd also singled out the work done on the issue by Rep. Robin Kelly, D-Ill., who until last year was ranking member of House Oversight’s IT subcommittee, and who remains a member of the parent committee.

“It’s not a sexy thing,” he said of their collective efforts, adding, “Nobody ever held a parade for IT procurement.”

Hurd said his first impression of a FITARA scorecard was that it was a “hokey idea,” but said he warmed up to the concept because “if you are not tracking things the you are never going to see behavior them change.”

He also indicated he could envision the day when the scorecard was no longer needed, saying that “when they [the scores] all turn blue, that’s when I think you turn them off.”