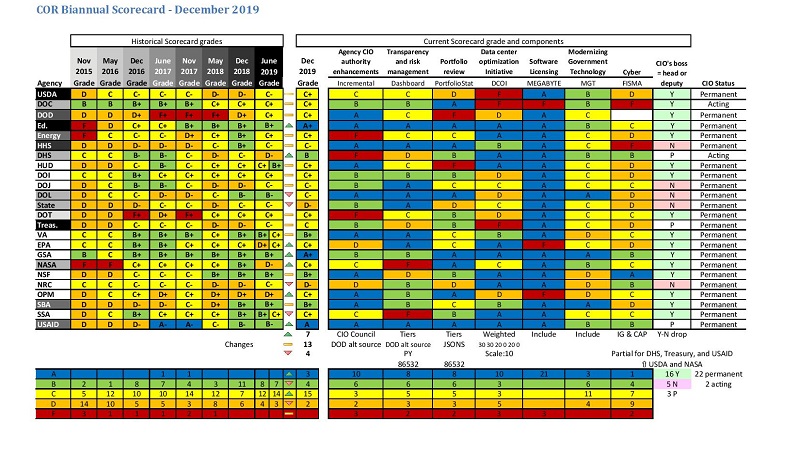 Of the 24 Federal agencies that received grades, nine improved on their previous scores in June, four saw declines, and 11 hung steady.

GSA and Education reached the apex with scores of “A+,” while USAID earned an even “A” grade. The three “A” grades were the most ever for agencies in one grading period since House Oversight began issuing the IT progress scorecard in 2015. Over the life of the scorecard series, USAID continues to hold bragging rights with a total of three “A” grades; the last A was earned by the agency in 2017.

The FITARA Scorecard, which the committee assembles with help from the Government Accountability Office (GAO), tracks progress by the 24 Federal CFO Act agencies on an evolving range of IT fronts. The grading categories for the ninth version of the scorecard released today include: CIO authority enhancements; transparency and risk management; portfolio review; Data Center Optimization Initiative (DCOI); software licensing; Modernizing Government Technology (MGT) Act; cybersecurity; CIO status (acting or permanent); and whether the CIO reports to the agency head or deputy.

Beyond the three agencies acing the scorecard, six others notched grade improvements since the prior scorecard in June:

Agencies with declining grades on Scorecard 9.0 were:

A total of 11 agencies earned unchanged scores. Here’s the list from top grades on down: