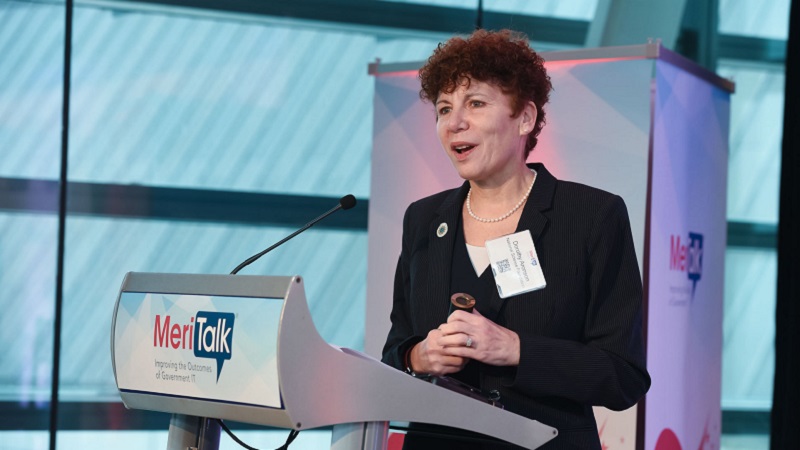 Dorothy Aronson, CIO of the National Science Foundation, pictured here at the 2018 FITARA Awards and Forum. On June 25, 2020, Aronson said NSF will likely "be much more of a virtual organization in the future."

Dorothy Aronson, CIO and Chief Data Officer at the National Science Foundation (NSF), was used to informal conversations with colleagues in the building or in the elevator of the roughly 1,600-person research shop in Alexandria, Virginia.

Prior to the pandemic, Aronson rarely teleworked, relying on the face-to-face interactions to spur the work in her dual-hat role. NSF had piloted Zoom, but had not yet deployed it. There were lingering questions about the effectiveness of telework, she said.

“All those fears have been vanquished as a result of this transformation,” said Aronson, speaking at a June 25 online event hosted by NextGov. “We became very clearly aware of how effective telework could be.”

Aronson said Zoom and an electronic signature system were both expedited. “People can make transitions a lot quicker than we think they can,” she said.

Dominic Cussatt, the deputy CIO at Department of Veterans Affairs (VA), can relate. He said to increase the VA’s mobile capacity, about 160,000 laptops and about 100,000 mobile devices have been ordered, with about 21,000 laptops shipping out just last week.

“People didn’t realize the capacity for a robust workforce experience,” said Cussatt, speaking at the same event. “It’s kind of turning them around.”

“We went from a desktop environment to a mobile device environment,” said Hill, also speaking at the event. Hill said the problem for GSA was that the network was not able to scale for that mobile environment. To provide services like Microsoft 365, he said GSA focused first on building out networks.

NSF’s Aronson said moving forward, lessons learned from the pandemic “can’t be unlearned.” “We probably will continue to be much more of a virtual organization in the future than we had been in the past,” she said.

“When we think about the technologies that we put in place to respond to this pandemic, those technologies are going to be a big part of the way that we do business moving forward,” said Walter Maikish, director of civilian operations at Cisco. “The remote access, the remote collaboration tools, all of those elements are not going to be here today, gone tomorrow, but are going to be at the heart of how we design architecture systems, and the like, moving forward.”