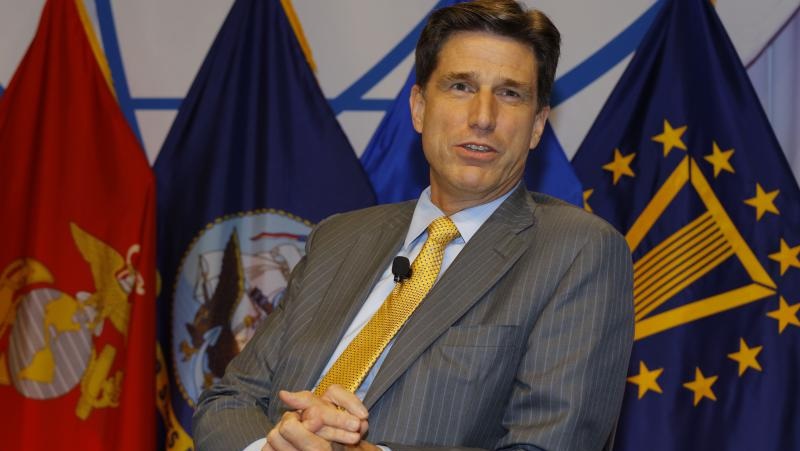 Those four areas – cloud, artificial intelligence, C3 (command, control, and communications), and cybersecurity – are organized not in order of importance, but rather “order of integration,” Deasy said, with each of the priorities flowing from the prior one.

“Cloud is the foundation for all the focus areas,” he said. “Technology advances such as AI will leverage it. AI will significantly help our warfighters, and we must make sure we have a modern command, control, and communications environment. Everything we design, build, and operate must be done with a security-first mindset.”

In what he said was just his “second time out of the building” in his 60-day DoD tenure, Deasy outlined a vision for DoD IT centered on those four areas to buttress the NDS’ three pillars: to build a more lethal force; strengthen alliances and attract new partners, and; reform the department for greater performance and affordability.

“Enterprise cloud will lay the foundation for so many future warfighting capabilities,” Deasy said, offering his thoughts on what DoD needs from its enterprise cloud – flexibility for workload placement, consistent infrastructure for classified and unclassified information, common governance, robust security, and the ability to scale infrastructure and platform as a service.

“To achieve this, the Department of Defense will fully leverage the benefits of a multi-cloud, multi-vendor environment,” he said “We operate with multiple clouds today, but our cloud’s capability is disparate and disjointed. We don’t have a true enterprise capability that will deliver the efficiencies and the scale that the department needs. And we need to do this smartly, and with pace.”

Deasy’s comments – which articulate a desire for a unified environment amid multiple cloud services, offerings, and platforms – seemed to hint at a single-award justification for the Joint Enterprise Defense Infrastructure (JEDI) contract.

A final RFP for JEDI has yet to be released, and Deasy wouldn’t say when it would. He did say he is working with DoD staff to ensure “clear messaging from the Department on our cloud adoption strategy” and “transparency on our approach with both industry as well as Congress.”

Deasy said that the recent establishment of the Joint Artificial Intelligence Center (JAIC) was a “significant effort” that “will help expand military advantage across mission sets in a way we’ve never seen before.”

“Starting out JAIC will help the Department advance its ability to organize AI capability delivery and learn as an enterprise,” Deasy said. “JAIC will help the Department communicate critical needs to our industry partners and foster advances that can be shared across Federal government and the private sector, to include non-traditional innovators.”

He said JAIC will also help to cultivate the right human talent and prioritize ethical AI development, a point of recent contention for some. To that end, Deasy said he is asking the Defense Innovation Board to connect with stakeholders “with the goal of producing recommended AI principles” for DoD.

Deasy said that while it was once “state of the art,” the nation’s nuclear command, control, and communications enterprise is now especially susceptible to “21st century threats from both space and cyberspace.”

“As part of the Department’s digital modernization, we will ensure updates to our nuclear triad are matched with modern, secure command and control systems,” Deasy said, highlighting a key critical infrastructure priority for DoD.

“At the center of everything we do has to be cyber. We must dominate in cyber,” Deasy said. “The complexity, the interdependencies of our digital modernization, and the adversary’s use of cyber means it is more critical each day that we place cybersecurity first.”

He said that DoD is in constant communication and collaboration with U.S. Cyber Command, Federal agencies, and industry to actively monitor threats. He also discussed the “tight intersection” with the intelligence community (IC) and his conversations with the Deputy Director of National Intelligence Sue Gordon to integrate the IC into cloud, AI, and cyber efforts.

But while cyber warfare presents a complex battleground, Deasy acknowledged that it’s not always the most complex things that are most important. “Countless cyber instances show that the overwhelming majority of cyber instances are preventable with basic cyber hygiene and data safeguards,” he said.

Still, Deasy waxed optimistic regarding DoD-wide buy-in on these four strategic areas, saying they will no doubt advance those three main goals of the NDS.

“There is a tremendous amount of energy at the Pentagon right now,” Deasy said. “This is a period of unified purpose, intellectual rigor, and unwavering dedication to our National Defense Strategy’s three lines of effort.”