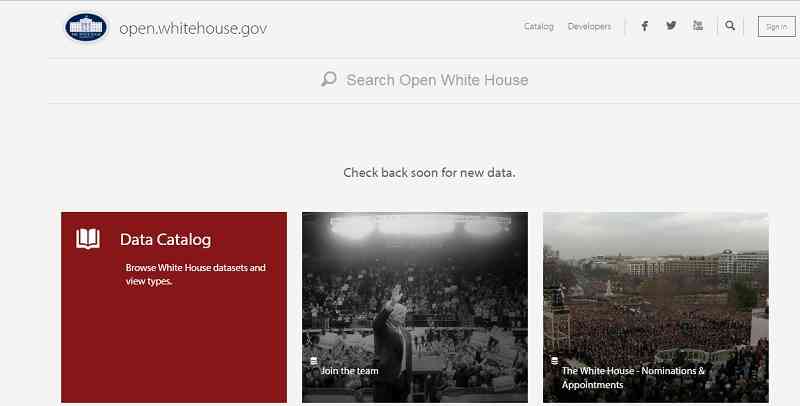 The White House has deleted all of the information that was housed on its open data portal, a move that is creating confusion about the digital transparency of the Trump administration.

The database, which was deleted last week, contained information about government salaries, visitor records, and government research. Most of the information has been archived on the Obama administration’s White House page, but some external links and internal pages no longer work in that format.

Maxwell Ogden, a programmer for the open data sharing project Dat Project, responded to public concern Tuesday, saying that he had downloaded a full copy of the archive on Jan. 20–Inauguration Day–which amounts to nine gigabits of data. He also posted the full metadata for people to see what was included in the database before it was taken off the Trump White House site.

However, the absence of any information on the new site and the updated message that says, “check back soon for new data” when users attempt to search the site by category, left people concerned about the transparency of the Trump administration. This move by the White House also follows news that the administration attempted to remove information on climate change from the Environmental Protection Agency’s website.

“The @WhiteHouse is creating confusion by not informing the public about what it’s doing on #opengov or where archived #opendata exists,” Howard tweeted.

The @WhiteHouse is creating confusion by not informing the public about what it's doing on #opengov or where archived #opendata persists.

President Obama launched the open data site to create a centralized repository of searchable information with government research. The research was added to the site to allow other scientists to use it for additional projects.

Howard said that it’s likely that new data will be uploaded to the site, but what type of data and when it will be added is unclear.

“They’ve created an expectation for that to be there,” Howard said to MeriTalk. “We don’t know anything else about it.”

Howard said that the absence of a communications director coupled with the White House’s choice not to use its blog or social media accounts to narrate the choices of the transition increases public fears about the data removal. Howard also said that the White House could be doing more to point out that the Obama-era information is still available on the archived website, even if it doesn’t appear to be available on the new site.

“If Trump administration launched a new @WhiteHouse website on 1/20 & pointed to archive, doubt we’d have weeks of stories about deletions,” Howard tweeted.

“It’s clear digital government is not a priority,” Howard said in a tweet.

The @WhiteHouse hasn't nominated a US CIO & US CTO, nor hired US CISO or replaced WH CISO. It's clear digital government is not a priority

Howard said that the fact that executive orders sometimes aren’t posted online for hours or even days are reminiscent of government in the early 2000s.

“The White House should publish the text of all Presidential actions on WhiteHouse.gov immediately upon the President’s signature,” Howard said in a blog post in January. “In 2017, the public should be able to inform itself, in plaintext on a website that meets modern accessibility standards. Anything less invites disaster by creating the potential for disinformation and misinterpretation of legally binding directives.”