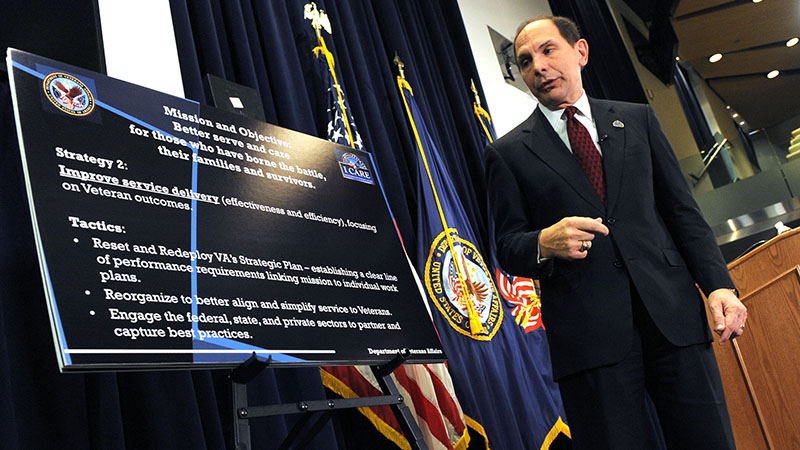 A MESSAGE FROM THE SECRETARY   The Road to Veterans Day    With just two months remaining before Veterans Day 2014, it’s time for me to report to you on what we’ve accomplished in our first 30 days together and on what we intend to accomplish in our next 60 days.  Our “Road to Veterans Day” begins with our mission and our immediate objective:    To better serve and care for those who have borne the battle and for their families and survivors.   To that end, we are moving quickly and decisively on three fronts:   ·        Rebuilding trust with Veterans and other Stakeholders ·        Improving service delivery focusing on better Veteran outcomes ·        Setting the course for longer-term excellence and reform   We are already making important progress:   Rebuilding trust:  We have reaffirmed our commitment to our mission and our “I-CARE” values — Integrity, Commitment, Advocacy, Respect, and Excellence — and are working to make reaffirmation an annual requirement.  We’re also connecting with Veterans and VA employees during visits to the field, listening to their concerns and identifying both problems and solutions, and we’re demonstrating accountability by meeting with stakeholders, talking to the press, and taking action in cases of poor performance or wrongdoing.   Improving service delivery:  We already have the foundation of a great VA Strategic Plan; now we are preparing to renew and redeploy that plan to set performance requirements that clearly link the mission to individual performance plans.  We are also developing better ways to gauge Veteran satisfaction, instituting the organizational strategy known as “Lean Management” throughout more of VA, and exploring options for reorganizing VA along common regional service boundaries, with integrated organizations focused on service to the Veteran as viewed by the Veteran.  We’re calling the concept “My VA” because that’s how Veterans should

The Department of Veterans Affairs has been consumed with transformation for the past 21 months, attempting to change from what Secretary Robert McDonald has privately described as a “Kremlinesque” culture to a high performing organization that puts veterans in control of their healthcare.

That transformation effort, known as MyVA, is McDonald’s direct response to the 2014 scheduling manipulation scandal that led to the deaths of at least 40 veterans who had been waiting to receive care. But with six months to go until the November presidential election, senior VA leaders are beginning to express significant concerns that their cultural and technological advancements may not survive into the next administration.

Emails and minutes from senior leadership meetings reviewed by MeriTalk show that although every component of VA has entered into the execution phase of the MyVA strategic plan, much of that effort is focused on preventing regression to the rules-based culture that led to the many scandals that have plagued the agency. As a result, senior officials are seeking plans that contribute to a “sense of irreversible momentum.”

During meetings of the MyVA Advisory Committee in April, senior VA leaders expressed concerns directly to McDonald about the agency’s ability to maintain progress and momentum on MyVA. “They are concerned about maintaining a sense of urgency for the transformation, continued momentum during anticipated senior leadership changes, ensuring that improvements in many areas are cascaded to the front line employees,” according to the meeting minutes.

A critical component to McDonald’s plan to infuse cultural change throughout VA is the Leaders Developing Leaders (LDL) initiative. It is the main element of VA’s overall employee engagement strategy, and has now been made a priority goal for the department. McDonald plans to bring the entire VA leadership team together in September “to commit to strategic agendas for next year.”

In response to this plan, VA’s Chief Information Officer, LaVerne Council has tasked each of her direct reports to develop and execute a 100-day program in support of the effort to transform the Office of Information & Technology. But Council is also concerned with what she described as “systemic issues” facing VA’s strategic IT roadmap.

According to Council, “it is hard to work with OIT. As a result, there is a lot of ‘shadow IT’ being put in place by the business lines” throughout VA. Council also said she does not feel VA has a mobile strategy yet, characterizing the agency’s efforts to date as strictly “tactical” in nature.

Workforce challenges are chief among Council’s concerns when it comes to the potential failure of VA’s transformation strategy. VA’s waiting list scandal has led to a 78 percent reduction in job applicants. There are currently 43,000 job openings to fill at the agency, and many senior officials are concerned about a steep shortage of leadership candidates.

During the April meeting, Council voiced concerns about “the gap between her staff’s skills and those necessary to manage and grow IT in the current environment.” According to Council, VA’s senior director and CIO positions are not competitive with the private sector.

VA’s strategy for sustaining momentum for the MyVA transformation effort involves documenting progress for endorsement by Veteran Service Organizations (VSOs). Once the election is over, VA transition teams would then visit VSO offices to get input for the next crop of VA leadership candidates.

“The MVAC agreed that third party communication about MyVA and transformation would be extremely effective, and the group agreed to develop a consensus report on what they think about the VA transformation effort,” the meeting minutes state. “They felt that such a report could not be ignored and [would] help mitigate the risk of falling back into old practices.” That report is scheduled to be released in late summer.

Policy changes and updates are another way VA plans to sustain momentum for its transformation efforts. VA is considering integrating the 12 initiatives that make up the MyVA program into policy to help sustain them. “The Secretary agreed, saying that this was a unique moment in time and the VA team needed to take advantage of it.”