The kicker is that most of these Federal buildings in which agencies house their regional offices are owned and managed by GSA. So GSA owns the building AND GSA owns the telecommunications contract that agencies are using. There has never been an area in Federal IT that is more primed for efficiency than this one.

But in NetWorst, GSA isn’t actually helping agencies, are they? There is a 7 percent fee that gets added to those transactions. So some could argue that GSA actually has an interest in not saving the Federal government money. This is because 7 percent of a shitload of money is a lot more than 7 percent of a smaller shitload of money. GSA actually has an incentive to make it look like they are saving the government money but that is just a perception, and that is why the data reported on this Networst contract is so sketchy.

If they actually wanted to save the government money, they would rationalize the telecommunications capabilities in each of these multi-tenant facilities. Remember, there are four offerors for network capabilities, AT&T, Verizon, Level 3, and CenturyLink. Now, I don’t mean any offense to Level 3 or CenturyLink, but they are small, but growing players in this space. The U.S., as it is in many ways, is divided between red and blue, but this time it is Verizon and AT&T. 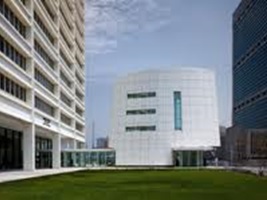 You have this centralized spot in downtown Atlanta and all of these agencies have offices in these building in this picture. And all of their networks are essentially going to either Verizon or AT&T. Think about how complex the spaghetti behind the walls must be. You have all these blue wires and red wires. Think about how many routers and switches must be attached to that spaghetti. Think about how onerous and wasteful it must be to manage and maintain all that redundant equipment.

Keep in mind that I’m not talking about high-side or classified stuff here. I’m just talking about the regular old network that people use to check their email and post jobs to USAJOBS. Each agency in that building is buying their own equipment separately and acting in a completely fragmented manner. This is despite the fact that they all ride the same elevators, park in the same garage, and drink from the same water fountains. Buying network capabilities like this would be like an agency paying for its own elevator within the building, or paying for its own air in the ventilation system. You can do that, but it is stupid, and it costs more money like that. “I’m sorry sir, but that elevator only goes to the 28th floor.”

Oh, I almost forgot. If we spend less money, then the 7 percent that GSA charges will actually decrease in overall dollars. So there is an inclination against rationalizing that equipment.

Naysayers will say, “But how could I price this so that it is fair? Agency A may use more data than Agency B. It wouldn’t be right to simply charge them the same price.”

I completely agree. Agencies should only pay for their utilization. We can measure that utilization based on their IP range. The Internet Protocol (IP) range at USDA is different from the IP range at Interior and EPA. Each agency has their own range of IP addresses. The traffic from all of these agencies can travel through the same equipment if we monitor the IP ranges on the equipment. At the end of the month we will have a big bill that will be due to Verizon, AT&T, Level 3 and CenturyLink. We take each of these bills and run the cost through the IP ranges to identify the portion that is from USDA, Interior, and EPA. We then split the bill based on that percentage.

This change will likely benefit smaller agencies more than large ones. Large agencies that have a lot of data going through the pipe are already paying a lot of money. Their problem is that they are competing with themselves. For example, USDA has 10 separate networks. Basically each big bureau has their own separate and distinct network. So they will spend less through the basic drive for efficiency. But small agencies like the Environmental Protection Agency (EPA) will see big opportunities if they don’t need to acquire their own equipment and can instead piggy-back off of someone else’s.

GSA owns or manages the buildings. GSA manages the Networst contract. GSA absolutely must step up and start leading. This should have been the first strategic sourcing/category management capability. Agencies should absolutely not be acquiring telecommunications and network capabilities separately in co-located properties.

So new let’s switch gears for the future replacement for Networst. It is called NS2020 or Enterprise Infrastructure Solutions (EIS). This is supposedly what your 7 percent fee goes for. You can see the Request for Proposal on the website, https://www.fbo.gov/index?s=opportunity&mode=form&tab=core&id=1719f5f50ed2757c1984491f04bfb93d. There are just a couple of things that I would draw your attention to. Clearly it doesn’t propose to tackle the fragmentation that I just mentioned. But it is also deficient in a couple other really important areas, specifically, IPv6, mobile, and accessibility.