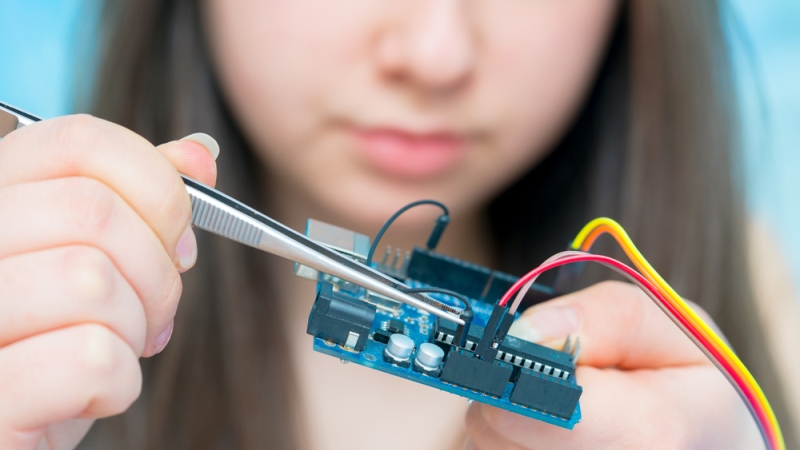 The State Department announced that teenage girls from Algeria, Egypt, Jordan, Lebanon, Morocco, Palestinian Territories, and Tunisia will participate in the TechGirls exchange program July 12-Aug. 3, as the agency scrambles to grant visas to other countries.

The TechGirls initiative’s goal is to empower girls around the world to become leaders in STEM fields. The 28 participants will attend leadership clinics and project management workshops at Virginia Tech in Blacksburg, Va., and in Washington, D.C. While at Virginia Tech, the teens will also participate in an eight-day, interactive technology and coding camp conducted by the Department of Computer Science Training, participate in a day of job shadowing with top tech companies in the Washington area, and engage in community service activities. Former participants in the program have used the experiences to train more than 2,300 peers in their home countries.

Notably absent at the State Department’s events are participants from Afghanistan.

A team of girls who intended to compete in the FIRST Global international robotics challenge in July in Washington were  initially denied visas to enter the United States. More than 160 nations planned to send teams to the challenge, which is held in different countries each year.

The six teenage girls took the 500-mile journey to the U.S. Embassy in Kabul twice to apply for their visas. One week before the start of the event, on July 13, the girls were notified that they had been granted access to the United States after all.

Ivanka Trump, senior adviser to the president, who advocates for working women, opened the second day of the competition on July 18.

“I truly believe our greatest power is the power to convene, to bring nations together where people find what they have in common is greater than their differences,” said Joe Sestak, FIRST Global President, former U.S. Navy admiral and congressman. “This is why I am most grateful to the U.S. Government and the State Department for ensuring that Afghanistan—as well as Gambia, Yemen, Libya, and Vanuatu this past week—would be able to join us for this international competition.”