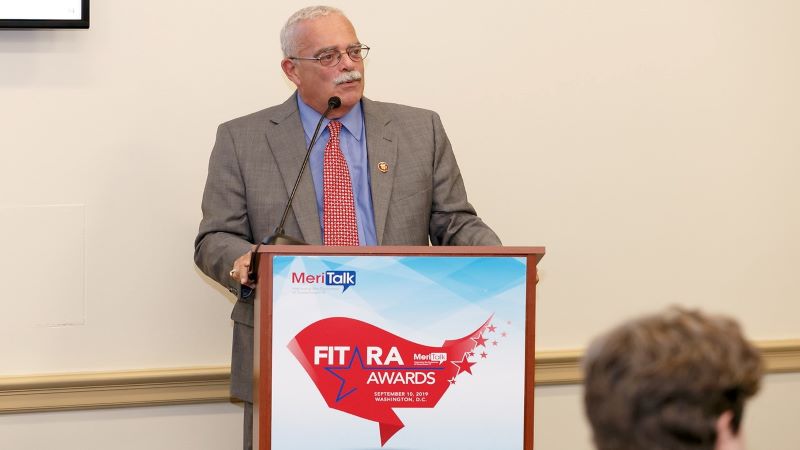 “We will continue to be flexible and evolve the Scorecard,” Rep. Connolly said at MeriTalk’s FITARA Awards event on Capitol Hill on Sept. 10. At the same time, he pledged, “We are going to continue our oversight … We are not going to let up.”

The committee published its latest Scorecard in June, with agencies scores on a stable trend, but also with winds of change blowing for future scores due to shifts in the way that grades were figured. The first scoring change mapped to finalization by the Office of Management and Budget (OMB) of its Data Center Optimization Initiative policy, and the second was the addition of cybersecurity scores to final grade tabulations.

Speaking last night to a packed house of Federal agency IT executives receiving FITARA awards, Rep. Connolly said that even though the July scorecard showed “pretty static” grades, many agencies have made progress in discrete areas including software licensing and PortfolioStat grading.

“I do think the work you are doing is very important,” he told the agency officials.

At the same time, he urged agencies to take a range of steps to boost their scores for the next grading period in December, including making sure that agency CIOs report directly to the agency Secretary or Deputy Secretary. Until agencies take that step, he said, “we are going to hold ourselves back.”

Rep. Connolly also reiterated concerns about the security of older Federal IT systems, which he said can be easier to hack into, with potentially disastrous results because agency systems often contain big databases of citizen information. Protecting the “privacy of citizens” data, he said, remains a “moral obligation” for the government.

And he pledged more work in Congress to promote the Federal IT modernization agenda. “I have work to do with my colleagues up here,” and “you have your work to do at agencies,” he said. Favoring positive action in Congress is the bipartisan nature of Federal IT issues. “If we can’t find common ground on this issue, I don’t know where we can,” the congressman said.

“I’m here to celebrate what agencies are doing” to improve their grades and their IT operations, said Federal CIO Suzette Kent at last night’s event.

“We are going to keep raising the bar” on Federal IT performance, she said, and pledged to work with Congress and across the administration to get that done. “What’s the common ground? Improving Federal IT across the board,” she told the crowd.

Also speaking at the FITARA Awards ceremony, Gary Newgaard, vice president of public sector at Pure Storage, issued a strong call for further Federal IT modernization efforts. Operations and maintenance spending on legacy infrastructure “is what crushes new initiatives in the Federal space” by soaking up large portions of agency IT budgets, he said. Newgaard urged Federal IT executives to “take advantage of the newer technology in the market” which he said is “far less expensive” to operate than legacy gear, and makes possible the development of cutting-edge applications like artificial intelligence.

Federal agency CIOs and their staffs stepped up to receive several well-deserved awards, including:

Rep. Conolly also thanked MeriTalk for its work to create the FITARA Dashboard that provides an enhanced view and analytical presentation of the scoring data that the committee issues. The dashboard, he said, provides an “understandable, comprehensible” view of the data, and added, “We will keep using it as often as you keep providing it.”