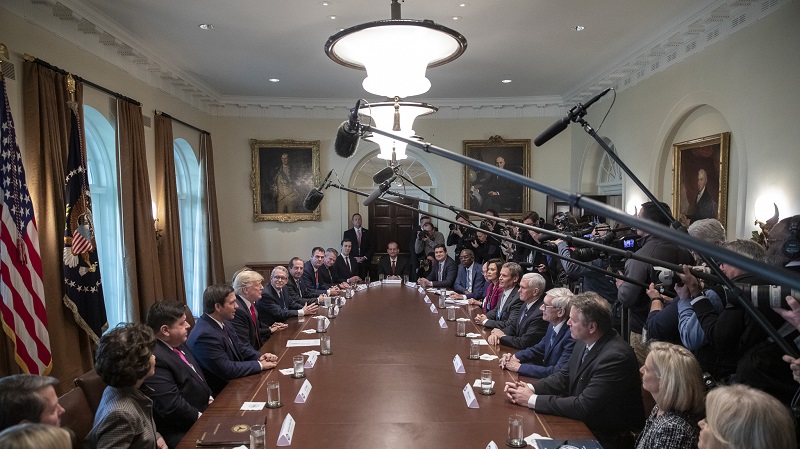 During remarks to reporters on Sunday, President Trump explained his comfort with having a number of acting agency secretaries in his cabinet, saying he is in “no hurry” to name new nominees to head agencies on a permanent and confirmable basis.

“I have acting [secretaries]. My actings are doing really great,” said President Trump. “I sort of like acting, gives me more flexibility.”

Currently, President Trump’s cabinet has no permanent heads at the Departments of Defense (DoD), Interior, Justice (DoJ), and the Environmental Protection Agency (EPA), and only acting officials as ambassador to the United Nations, and White House chief of staff. While the President noted he is comfortable with acting officials, his administration has nominated permanent heads for DoJ, and ambassador to the UN, and tapped current acting administrator Andrew Wheeler to lead the EPA. President Trump has yet to name nominees to the top spots at DoD or Interior.

The prevalence of acting officials also extends to the world of Federal IT. With the confirmation of James Gfrerer as CIO at the Department of Veterans Affairs on Jan. 3, there are currently five CFO Act agencies with acting CIOs – the Departments of Commerce, Health and Human Services (HHS), Interior, State, and the EPA.

The issue of acting CIOs has elicited concern from Congress, and the semi-annual FITARA (Federal Information Technology Acquisition Reform Act) issued by the House Oversight and Reform Committee features acting/permanent CIO status as a metric.

Rep. Will Hurd, R-Texas, one of the House members most involved in Federal IT issues, has publicly called for more permanent CIOs at agencies. “I’m worried that we don’t want to stall some of the progress that we’ve achieved over the last couple of years,” said Hurd in an October 2017 interview.

Separately, an August 2018 report from the Government Accountability Office surveyed Federal CIOs, found that the lack of consistent leadership exacerbated agency IT problems, and recommended that CIOs need to be in place for three to five years to be effective.

But if President Trump’s mindset on acting officials reflects prevailing sentiment in the administration, expect to see the idea of acting CIOs stick around.