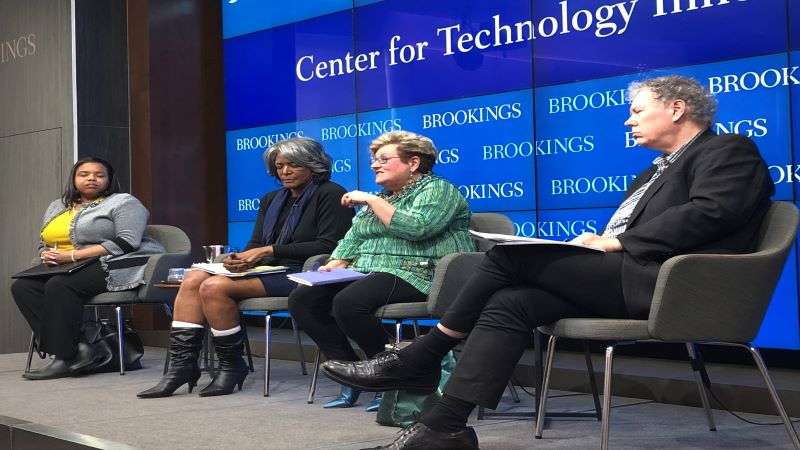 From left to right, Sakira Cook, Edwina Dorch, Faye Taxman, and Darrell M. West discuss the use of AI and predictive analytics in the criminal justice system at a Brookings Institution event, Wednesday, Feb. 19, 2020.

The use of artificial intelligence (AI) and predictive analytics in the criminal justice system is the latest attempt to make sentencing decisions more accurately and reduce recidivism.

“If you go back to 1920, we had prison psychologists trying to make decisions about who should be released from prison,” said Faye Taxman, professor and director of the Center for Advancing Correctional Excellence at George Mason University, at today’s Brookings Institution event on AI, predictive analytics, and criminal justice.

According to Taxman, the question is: “Do the tools perform better than the individuals that we are asking to make these decisions?”

Panelist Edwina Dorch, retired professor at the Texas A&M School of Government and Public Service, cited COMPAS [Correctional Offender Management Profiling for Alternative Sanctions] as an example of a risk assessment tool that predicts rearrest more accurately than human beings. However, for black Americans, the tool only predicts accurately 63 percent of the time, said Dorch.

The tools need to be updated to reflect changes to the law, said Dorch. Factoring in changes like the decriminalization of marijuana in D.C. or the reform of the bail system in New York would make the algorithms more accurate, she said.

The algorithms are based foundationally on arrest data, said Sakira Cook, director of the justice reform program at The Leadership Conference on Civil and Human Rights. Cook said this data is flawed and should not be used due to historical biases in policing and conviction rates.

Calling the tools “not transparent,” Cook said lawyers cannot interrogate the dataset to see if the data is accurate for their client.

Taxman called for the creation of an independent national commission to check the methodology of the tools.

“We have no national standards for how these tools should be developed,” said Taxman. “How do we create instruments that are fair, transparent, and actually work to help people address the factors for why they are involved in criminal behavior?”

“We don’t have well-designed instruments,” said Taxman. “We, as a public, should demand better.”