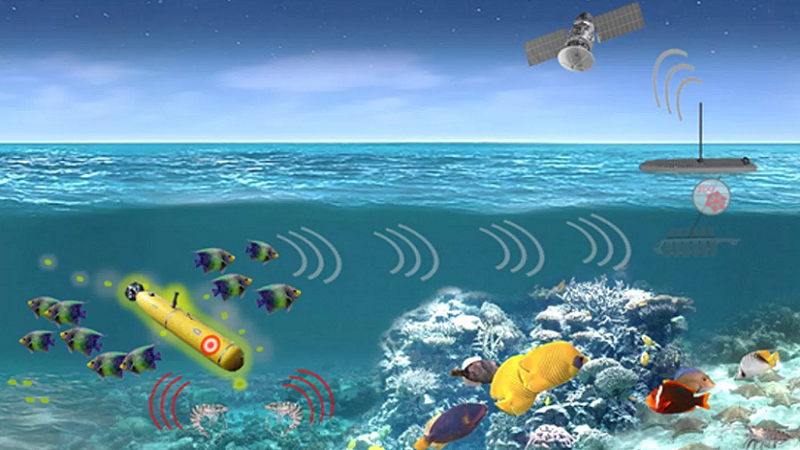 Creating some kind of an Internet of Things (IoT) beneath the ocean would be a daunting task, because the ocean tends to not cooperate. It’s vast, constantly in motion, and filled with water that’s not exactly friendly to communication as we know it. It can be tough to put hardware in place that’s up to the task of tracking activity in the waters around them. As a result, an adversary can often operate “under the radar,” so to speak, moving about underwater without detection.

The Pentagon’s research arm wants to give the job to entities that have already proven their ability to thrive in the deep–marine organisms that are keenly aware of their surroundings and can sense activity occurring around them. Having the location of sensors already in place can solve half the problem.

The Defense Advanced Research Projects Agency (DARPA) is setting out to study both natural and modified marine life to determine which could best support sensors systems that could identify activities and pass along information about them in strategic waters such as straits and littoral regions, DARPA said in an announcement. The Persistent Aquatic Living Sensors (PALS) program will study how organisms react to the presence of manned and unmanned underwater vehicles, translate those reactions, and then relay what they mean via networked devices.

“The U.S. Navy’s current approach to detecting and monitoring underwater vehicles is hardware-centric and resource intensive. As a result, the capability is mostly used at the tactical level to protect high-value assets like aircraft carriers, and less so at the broader strategic level,” said program manager Lori Adornato. “If we can tap into the innate sensing capabilities of living organisms that are ubiquitous in the oceans, we can extend our ability to track adversary activity and do so discreetly, on a persistent basis, and with enough precision to characterize the size and type of adversary vehicles.”

PALS is one of several projects aimed at solving the challenges of communicating in the ocean, which in some ways is as mysterious as deep space. Research into underwater wireless sensor networks has shown promise, but underwater networks face challenges in bandwidth and reliability that above-ground networks don’t have. Placing sensors around the ocean also is difficult.

DARPA recently floated the idea of an Ocean of Things to find cost-effective ways to float commercially available sensors on the seas, gathering and analyzing their information via the cloud. But that program deals with what’s on the surface. And while it would focus its sensors on detecting military and commercial maritime activity, it also would collect meteorological and oceanographic data. PALS would focus on what’s beneath the surface, particularly with regard to manmade activity.

There would be clear advantages to PALS’ approach. Those ocean organisms are everywhere, for one thing, and they have a built-in range of senses for sound, light, touch, pressure, and other stimuli. They’re also living, so they adapt to changes in their environment and reproduce, presenting a sustained source of information. “Our ideal scenario for PALS is to leverage a wide range of native marine organisms, with no need to train, house, or modify them in any way, which would open up this type of sensing to many locations,” Adornato said. Underwater organisms are just one part of the equation. The project also is looking for hardware, software, and algorithms to translate and communicate organism behavior.

DARPA is looking for industry proposals, mainly for tapping into natural organisms, though the agency says it’s willing to listen to ideas about using modified organisms. Any modified organisms would only be tested in a controlled environment. A Proposers Day is set for March 2 in Arlington, Va.

Seems Dr. Dolittle got all wet at DARPA.