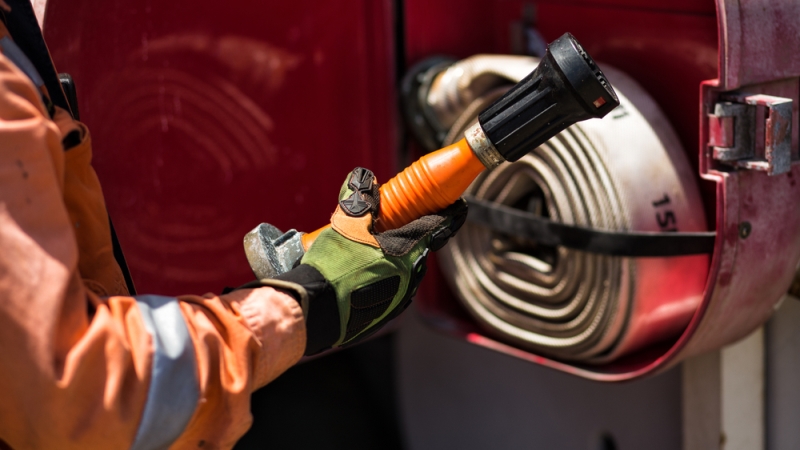 The gloves, marketed as Shelby Flex-Tuff Hybrid Shield (HS), go for about $145 a pair, which is roughly 25 percent more expensive than standard gloves firefighters use today. According to Tom Ragan, president of Shelby Gloves, the companies are working to lower the price and use simpler manufacturing techniques. He said that, while feedback from firefighters has been positive, some fire departments have been hesitant to make the substantial investment of purchasing the gloves. Ragan compared the process to purchasing an expensive new car; people need to test and trust the product before buying it.

“It’s a high-end product. If somebody’s going to spend $145 on gloves, we’re going to make sure it has all the bells and whistles. We’re constantly tweaking and improving it,” Ragan said. “You want to know all about it before you invest in it.”

Shelby Gloves, which specializes in durable gloves for fire and industrial work, has sold a couple of thousand units of the Shelby Flex-Tuff HS, according to Ragan. He said that consulting with firefighters and allowing them to test the glove was important in aligning the product with their specifications.

NanoSonic and Shelby Gloves have been working together as partners for a few years. In 2011, NanoSonic responded to a Department of Homeland Security (DHS) Science and Technology Directorate (S&T) solicitation for improved firefighter gloves and worked with Shelby Gloves to design and market the product. DHS S&T awarded NanoSonic a research grant to integrate hybrid shield fabric technology that provides enhanced flexibility within cold and wet environments, water repellency, and improved fire resistance.

Jennifer Lalli, president at NanoSonic, said the company trademarked its HS technology in 2008. According to the feedback NanoSonic has received from firefighters, the Shelby Flex-Tuff HS is more flexible and easy to remove. Lalli, who earned her Ph.D. in Polymer Chemistry from Virginia Tech in 2002, compared the glove’s insulation abilities to a puffy down jacket, rather than a fleece.

“Air has the lowest thermal connectivity. When you press a fleece, it loses insulation and becomes essentially a T-shirt,” Lalli said. “This glove allows them to turn the knob of a door and not lose insulation.”

S&T sent out its solicitation after many first responders expressed the need for an improved glove at the annual First Responder Resource Group (FRRG) meeting a few years ago. The meeting is an opportunity for first responders to tell DHS officials what gaps they face in the devices needed for everyday work.

Gregory Price, an FRG project manager at S&T, said the department hosted evaluations of the gloves with firefighters in Chicago. Representatives from Shelby Gloves, NanoSonic, and firefighters from across the country attended the testing session. The firefighters completed a set of tasks that simulated their work, such as handling ladders and turning wet nozzles, with both their own gloves and the Flex-Tuff HS. Price said the responses were positive, and that FRGs will purchase the gloves at a larger scale during their departments’ next bulk purchase cycle. He said the prices should not act as a deterrent because the Flex-Tuff HS is built to last much longer than the gloves they currently use.

“We think first responders will get 35-60 percent more wear time out of these gloves. We’re hoping people will become more aware of it,” Price said. “We’ve had fabulous feedback from firefighters.”