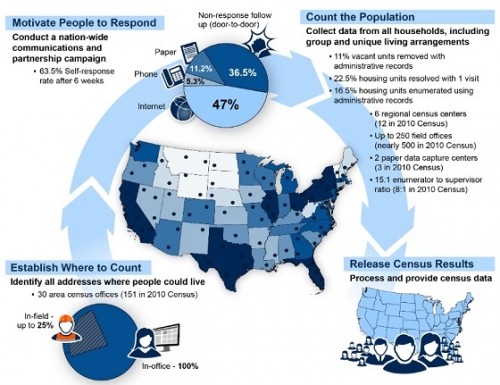 The U.S. Census Bureau is running out of time to upgrade its IT systems ahead of the 2020 head count and could save $1.4 billion by using administrative records instead of foot soldiers that go door-to-door to find nonresponders, the Government Accountability Office says in two new reports.

Enough is enough, the report says as it details the urgency to get the decennial count on the right track in the next two years–ahead of the head count.

“This lack of prioritization of IT decisions has been a continuing trend,” says one of the reports delivered to Congress on Tuesday. “With the deferral of key IT-related decisions, the Bureau is running out of time to develop, acquire and implement the systems it will need to deliver the redesign.”

It still faces challenges in the areas of workforce planning and information security, the report says. Among them:

In prior reports, the GAO recommended the bureau prioritize its work in time for delivering the IT systems, but that has not completely happened, one report says.

With a life-cycle cost of about $13 billion, the 2010 Census was the most expensive in history and was 56 percent more costly than the $8.1 billion 2000 Census (in constant 2010 dollars). The bureau estimates that its use of administrative records in the 2020 Census will reduce the cost compared to traditional census methods by $1.4 billion.

To cut down on administrative costs, the bureau plans to identify vacant housing units and predict the best time to visit nonresponding housing units instead of hiring temporary Census workers to find nonrespondents.

In a change from this expensive practice of hiring thousands of on-the-ground workers, the bureau is working to gain access to additional databases that could help improve its ability to find historically hard-to-count populations, such as certain minority groups and young children.

However, all of these efforts will be fruitless if the bureau’s IT systems are not up to date in the next two years, the report concludes.

Judi Hasson is a contributing writer for MeriTalk.