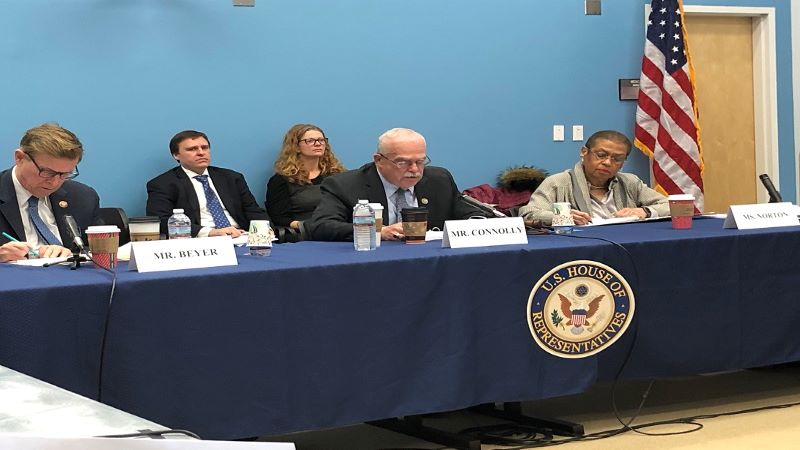 “Tens of thousands of jobs remain unfilled as applicants wait for their background investigation,” said Connolly, who chairs the House subcommittee on government operations.

Citing a January announcement of the Defense Counterintelligence and Security Agency, which conducts the investigations, Connolly said the current backlog is at 231,000 cases. This number is down from an all-time high of 725,000 cases in 2018, he said.

“Many will argue that the only way we get more speed is if we take more risk by actually giving a clearance to someone who doesn’t need it,” said David Berteau, president and CEO of the Professional Services Council.

“It’s not a tradeoff,” said Berteau, between speed and security. “You can, in fact, get both.”

Berteau emphasized process improvements, IT system improvements, and continuous evaluation as opposed to periodic reevaluations as ways to make the system better.

Both Connolly and Del. Eleanor Holmes Norton, D-D.C., who joined Connolly at the event, expressed interest in a continuous evaluation process.

“The idea of moving to continuous vetting after an initial background investigation rather than the current practice of periodic reinvestigations seems to make sense,” Connolly said.

Gregory Torres, principal/director of personnel security at Booz Allen Hamilton, noted that the Department of Defense has been doing continuous evaluation for multiple years.

Torres also highlighted the idea of interagency reciprocity on security clearances, referencing a June paper of the Intelligence and National Security Alliance on the subject. Torres said of the 14 recommendations on how to fix the problem, only three have been implemented.

Connolly said he was interested in following up on the paper’s other recommendations.

Rep. Don Beyer, D-Va., who represents the district of many of the participating companies, said he appreciated the chairman’s focus on interagency reciprocity.

The desire of evaluators to not make a mistake on a clearance versus the need for speed, Norton said is “terrible dilemma for our subcommittee.”

Norton also expressed a concern about staff shortages in certain areas, such as polygraphists.