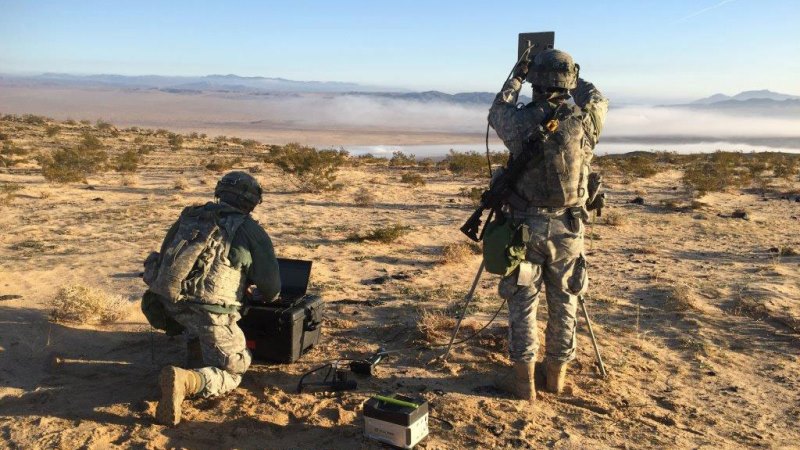 Soldiers with the Fort Meade, Md.-based 780th Military Intelligence Brigade conduct cyberspace operations during a training rotation for the 2nd Stryker Brigade Combat Team, 2nd Infantry Division, at the National Training Center at Fort Irwin, Calif., on Jan. 24. Several cyber organizations took part in the rotation as part of an pilot program to designed to help the Army develop how it will build and employ cyber in its tactical formations. (Photo: U.S. Army)

As the U.S. military shifts its focus to Europe and Asia, the cyber dominance the Army enjoyed in Afghanistan and Iraq may no longer be assured, according to a recently released Army field manual.

“Over the past decade of conflict, the U.S. Army has deployed the most capable communications systems in its history. U.S. forces dominated cyberspace and the electromagnetic spectrum (EMS) in Afghanistan and Iraq against enemies and adversaries lacking the technical capabilities to challenge our superiority in cyberspace,” the manual said. “However, regional peers have since demonstrated impressive capabilities in a hybrid operational environment that threaten the Army’s dominance in cyberspace and the EMS.”

Russia, China, and Iran are often listed as the most prevalent cyber threats to the U.S. Russia proved just those capabilities through hacking Democratic National Committee (DNC) emails and leaking information to WikiLeaks prior to the 2016 presidential election.

Recently, experts have claimed that current international norms in cyberspace are not enough to deter state actors from interfering in the elections of other nations, and that U.S. response to the DNC hacks was not enough to prevent future behavior.

Though the manual asserts U.S. Army dominance over less prepared adversaries, it also notes that the low cost and ease with which those adversaries can enter into the cyber warfare space brings their capabilities closer to that of the U.S.

“Some threats are well equipped and well trained while some are novices using readily available and relatively inexpensive equipment and software,” the manual said. “The complexity, low entry cost, widely available resources, minimally required technological investment, and ease of anonymity in cyberspace enables enemies and adversaries to inflict serious harm. The expanded availability of commercial off-the-shelf technology provides adversaries with increasingly flexible and affordable technology to adapt to military purposes. Low barriers to use cyberspace significantly decrease the traditional capability gap between the United States and adversaries, allowing them to field sophisticated cyberspace capabilities.”

The Army manual places high importance on cyberspace dominance, noting that cyber is often interwoven into other arenas of Army action.

“Cyberspace pervades the land, air, maritime, and space domains through the EMS and wired networks,” the manual said. “The Army uses the cyberspace domain every day to communicate, store data, plan missions, and perform tasks. In today’s dynamic operational environment, the exercise of mission command depends on freedom of maneuver within the cyberspace domain.”

The manual also identifies the communication capabilities provided by cyberspace as a potential critical vulnerability for adversaries to exploit.

“Rapid developments in cyberspace and the EMS will challenge any assumptions of the Army’s advantage in this domain,” the manual said. “While it cannot defend against every kind of intrusion, the Army must take steps to identify, prioritize, and defend its most important networks and data. Commanders and cyberspace operations experts must also adapt quickly and effectively to enemy and adversary presence inside cyberspace systems.”