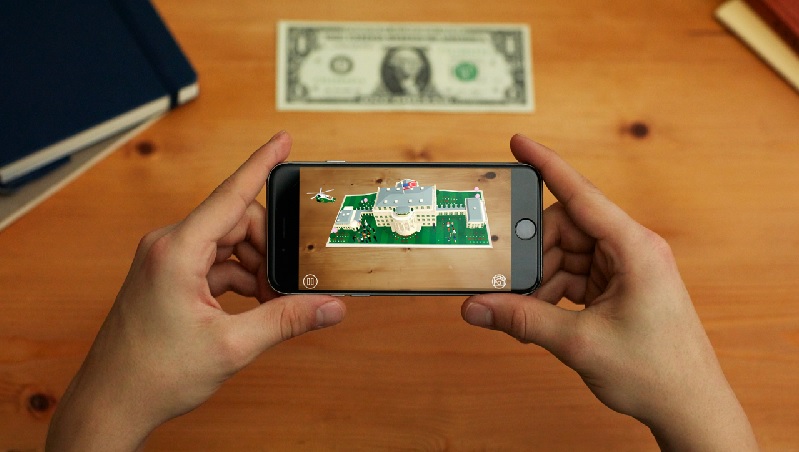 The app, released Thursday, allows users to point their cameras at a dollar bill, which will transform into a 3-D version of the White House, showing the effects of the seasons on the exterior of the building. Users can interact with the image to open up the Oval Office or release Secret Service agents onto the roof.

The app begins with President Obama arriving in a helicopter, and ends with him leaving with his family in the winter, symbolizing the legacy that Obama has left by using digital innovation in the White House, according to Nexus’ website.

“As you experience a year at the White House–from the Easter Egg Roll to a State Arrival Ceremony–you’ll see that even as seasons and people change, the White House endures as an institution of American democracy,” said Josh Earnest, Obama’s press secretary. “That’s why we teamed up with the White House Historical Association and Nexus Studios to create this augmented reality experience–to educate and inspire Americans to learn all about what the People’s House stands for.”

Luke Ritchie, head of Interactive Arts and leader of the project, said the app was funded solely by Nexus Studios. The White House can allow this in this case because the McNamara-O’Hara Service Contract Act (SCA), which requires Federal agencies to pay contractors specific amounts, doesn’t apply to companies based outside of the United States like Nexus.

Nexus’ work upgraded from the cover of one month’s issue of the New Yorker to every U.S. dollar bill.

“Having seen the New Yorker experience, they were impressed by the visual sophistication that was now possible in AR and of course a platform that could be easily viewed by millions of people without any investment or expensive hardware,” said Ritchie. “I like to think that the reason the White House asked us is that they wanted a company who could take on the storytelling, visual design and animation, and interactive design at the highest level all under one roof.”