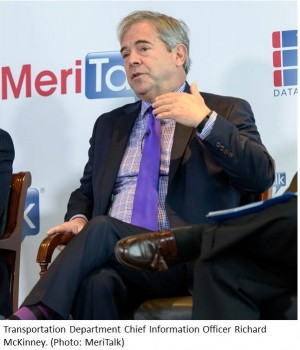 In one of the first concrete examples that the Federal Information Technology Acquisition Reform Act, known as FITARA, has indeed delivered new authorities to agency chief information officers, Transportation Department CIO Richard McKinney this week froze all IT purchases across the agency until component agency CIOs deliver a strategic spending plan.

The decision came after Mckinney attended a meeting of senior acquisition representatives from DOT’s 12 operating components—which include the Federal Aviation Administration and the National Highway Traffic Safety Administration, among others—at which officials acknowledged that components were engaged in major IT purchases with no oversight or plan for how that technology would affect the agency’s overall infrastructure.

“They were candid and honest enough with me to admit that we have IT acquisition going on and not even the component CIOs knew about it,” McKinney said Wednesday at the second annual FITARA Forum, hosted by MeriTalk in partnership with the Office of Management and Budget. “In other words, there was spend going on that nobody was weighing in on.”

McKinney told MeriTalk he moved this week to “put a freeze on all IT purchases” until the CIOs of the various Transportation Department component agencies deliver to him a comprehensive IT spending plan. “We’ve got to be more deliberate about what we’re doing and we can’t let IT acquisition decisions be made down in a program where stuff just shows up on the dock and somehow I’m supposed to slap it into the data center and run it, manage it and care and feed it,” he said. “So until the component CIOs can present me with a comprehensive IT spend plan, I’m not going to approve any [acquisitions]. I’m going to use the FITARA authority to say ‘I’m not approving any IT purchases.’ ”

Such freezes are not unheard of in government. Last year, Defense Department CIO Terry Halvorsen issued a similar freeze for all purchases over $1 million without the military services and components coordinating directly through the Pentagon CIO’s office.

Authored by Rep. Gerry Connolly, D-Va., and Rep. Darrell Issa, R-Calif., and passed into law late last year, FITARA is designed to enhance the authority of federal agency CIOs by giving them powers over hiring, project funding, and approvals, and the ability to delegate responsibilities to subcomponent CIOs. It also takes aim at data center consolidation, redundant IT systems, and agile development practices that will lower costs and avoid major program failures. It is considered the most comprehensive overhaul of federal IT acquisition since the 1996 Clinger-Cohen Act.

Connolly, who also spoke Wednesday at the FITARA Forum in Washington, D.C., said the intent of the legislation was to “change IT from another commodity to a transformational tool.”

He acknowledged knowing of some reluctance at the agency level to embrace change. “There are some agencies that are pushing back. We will push back very hard on that,” Connolly said. “There is absolutely no light between us,” he said, referring to the bipartisan support for FITARA on Capitol Hill.

McKinney’s IT spending freeze “generated quite a conversation” at the component level throughout the Transportation Department, he acknowledged. At first, some component CIOs reacted by saying McKinney didn’t have the authority to take such actions. “And then it was, oh, he does, OK, whoops,” recalled McKinney.

McKinney has also formed a tiger team that is now going to each component agency to obtain an “as-is” blueprint of their IT infrastructure. “We are what we buy. I don’t feel like we have a good collective understanding of where we are exactly right now,” he said. “If you want to win somebody over, show them how you can save them money.”

But pockets of resistance remain in certain corners of DOT, where FITARA reforms are considered too radical and costly, McKinney acknowledged. “I’m absolutely convinced that the things that I’m trying to do will drive their [costs] down. I absolutely believe that the things we are trying to do are going to drive down costs and drive up performance,” he said. “And that will cement FITARA.”