The Government Accountability Office (GAO) wrote a super-awesome report on Strategic Sourcing, GAO-13-417 3. I have a tendency to just talk about the government’s potential in terms of scale; that is where commodity IT is after all. But Cristina Chaplain, the woman who wrote the report, is much more nuanced than me. Her big takeaway is that, based on how many suppliers there are and how complicated the work is companies employ different tactics to drive efficiency (chart below). 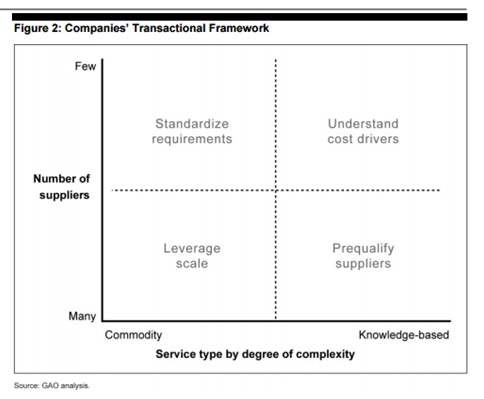 You can see that commodity is clearly in the “Leverage Scale” quadrant when there are many suppliers. So, when we are buying things like software we should be focused on leveraging our scale. That seems to be what GAO was aiming for in the software focused report, GAO-14-413 4. That report is really good. If you are serious about working for the government, you will read it.

The one thing that I will add is the concept that we already have what we need to manage software, laptops (and desktops) and every node that touches our networks better. We use these management tools every day; we just don’t use them to support the acquisition and life cycle. What I’m talking about are the asset management capabilities that agencies are getting under CDM. We got those asset management tools so that we could do a better job in patching them and making sure that we have addressed the vulnerabilities. We need to leverage that investment to know how many we have when it comes to licensing, retiring, and replacing them over time. What I’m proposing is that the security side and the acquisition side need to get together to share information.

This is a really hard problem to solve. A couple years ago we went after Microsoft. I mean, c’mon, if there is one software that I can guarantee is in every frickin agency, it is Microsoft. In the end we couldn’t get there. The entire deal crumbled, why? Because of the timing and the requirement. Quite frankly, agencies couldn’t identify how much Windows and Office they had installed within their enterprises. How completely stupid is that? Listen, if you are a CIO and you don’t know how many installations of Windows you have in your enterprise, you should take your computer to the help desk and tell the person there that you are too stupid to be a CIO. Here was a situation in which we were going to get a bunch of agencies, like the Navy, Army, and HHS to all buy their Microsoft software as if we were one government. The impact to unit price would have saved so much money, money that could have been pushed back into mission. But instead, we screwed it up because we couldn’t count how many installations we have.

Do I sound like I’m mad about that? I should, because I am. And you should be too, because you probably pay taxes and this is an example of taxes that are wasted on fragmented buying.

Hopefully though, things will get better. OMB has published a software management draft memo 5. They don’t have any choice but to publish it formally because FITARA requires them to. The concept of leveraging CDM is baked in there too, so I’m optimistic. Nothing would piss me off more than for some stupid agency to go out and buy more software to manage software. I’m sure it will happen.

Moving up the table to where there are few suppliers but still for a commodity is the software related to enterprise resource planning (ERP) software. People with gray hair will know what ERP means, but for you millennials, this is the software behind the accounting, budgeting, and finance systems at agencies. There are only three flavors of this software: SAP, Oracle, and Momentum. Thus there are only a few offerors, so our strategy could change. GAO would say that we should “standardize our requirements.” I don’t know that we really need to do that, at least when it comes to purchasing and maintaining the software licenses. There are a few agencies using SAP, USDA, Interior, and NASA. A bunch of agencies use Oracle and smaller agencies and a few bureaus use CGI Momentum. My hope is that these agencies can pool their buying power to acquire these licenses cheaper than they would if they bought them separately. Just getting USDA and Interior together created the largest customer SAP has.

This logic is sound if you excuse the more fundamental question, why do agencies need to run their own financial systems? The truth is that they don’t, or at least they don’t at the magnitude they do today. There is no competitive advantage to be had by running your own financial system. They are expensive to maintain and require a lot of people to operate. Some agencies, like DHS, have more than one flavor of financial system. Other agencies, HHS for example, like the Oracle eBusiness Suite so much they have three separate installations. What a waste.

HUD tried to re-engineer their antiquated financial system three times. Three times they made a significant capital investment in these systems and three times they failed. The last time was particularly painful and it was then that the White House said that HUD shouldn’t be trying to upgrade their own financial system, instead they should move to a service provider. It hasn’t been without bumps along the road, but it has progressed well. Today HUD is a user of the Oracle system operated at Treasury. They actually got to the finish line, so that is new. And they will operate it for less than they were operating their own, aging system.

Thus far, four agencies have been designated as shared service providers for financial services 6. My opinion is that I would like to see at least three of each flavor. Thus, three SAP, three Oracle and three Momentum providers. Right now we have one SAP and three Oracle. NFC has plans to offer a Momentum capability in the future.

But I would like to have three providers for each flavor for a couple very specific reasons: price and innovation. If NFC is the only game in town for SAP, then they get monopolistic control over the prices and they can be lazy on innovating. Why invest money in innovating when your customers can’t leave? If you have a healthy amount of competition then the offerors will likely compete both on price and features, and that is good for everyone.

The Financial Innovation and Transformation (FIT) office is moving from Treasury to GSA where they will be able to focus on managing the shared service providers. Hopefully they will have another competition to identify a few more service providers in this space.

This notion is not some crazy idea. It has actually been tried before and has proven to be one of the more successful approaches to managing a commodity capability. Look at payroll in the Federal sector. We have a three-horse race between DFAS (DoD), NFC (USDA), and FPPS (Interior). This is because OPM worked out an oligarchy back in 2003 7.

The area that is related to both the financial systems and the payroll systems, which is primed for a consolidation opportunity is HR systems. I’m speechless in trying to rationalize how and why agencies have not gotten together more on HR systems. If there is one complaint that managers will recite at every agency, it is that the hiring/onboarding process takes too long or is broken. Well, let’s stop being stupid. Part of the reason the process is so dumb is because we have invented hundreds of ways to accomplish it. Most bureaus run their own HR systems and each one has differences and nuances that are unique. That’s dumb. All of our positions are posted to USAJobs. Health benefits are all coming from FEHB. When we retire, OPM is going to process that and pay us until we die. The things that make us similar far outweigh the things that make us different. We don’t need a million different systems to capture personnel plans, midyear and year-end reviews. We should be engaging the same consolidation for HR systems that we have for payroll and that we are for accounting. We can’t continue to support this level of fragmentation.

Very similar to the fragmentation in HR systems is the fragmentation in acquisition systems. Actually this is bat-shit crazy. While in the HR space there are two key touchpoints that centralize everything, posting jobs and retirement, in acquisition there are many more touchpoints to centralization. But that’s not all (crap now I sound like an infomercial), most of the acquisition systems are using the same software. Yes, how stupid is that? We’re all using the same software, called Prism (well, 16 of the 24 CFO Act agencies). But more than that, look at all the mandated touchpoints in which agencies are required to use a single system to perform the work for acquisitions. Offerors must register in the System for Award Management (SAM), and solicitations must be posted in FedBizOpps. People report their training and certifications to FAPIIS and use CPARS to report past performance and PPIRS to review past performance. (In the previous chapter, I already talked about all the fixing that PPIRS needs.) All procurement actions are recorded in FPDS. It is so freaking insane that we have centralized so much of the process and have decentralized the execution part of the process. Oh and shame on you, Compusearch (they are the company behind Prism), for perpetuating this extreme level of fragmentation across the community. I hope you made your money because your day is coming. Think about it, if Compusearch was such a strategic partner, wouldn’t they be working to make everybody’s Prism work about the same and have the same connectivity to the systems in the Integrated Award Environment? This could be such a good thing for the acquisition community because it would foster greater mobility among them. If the systems all pretty much worked the same then the only things that would be different are the interpretations and the ideas behind them. But no, the systems all work differently and are completely fragmented.

Everybody bemoans the fact that the acquisition process is fricked up. It takes too long, it is too confusing, it has dumb speed bumps, etc. Well guess what, any time someone wants to make a change to the process governmentwide, the DoD pipes in with a comment like, “how are you going to pay for that change for the 10,000 acquisition system in the DoD and then provide training for everyone on the change?” It is a fair comment, but why do we need 10,000 systems in just the DoD? I mean if we want to make a common sense change, it is pretty much impossible because of the complexity that has evolved around the process.