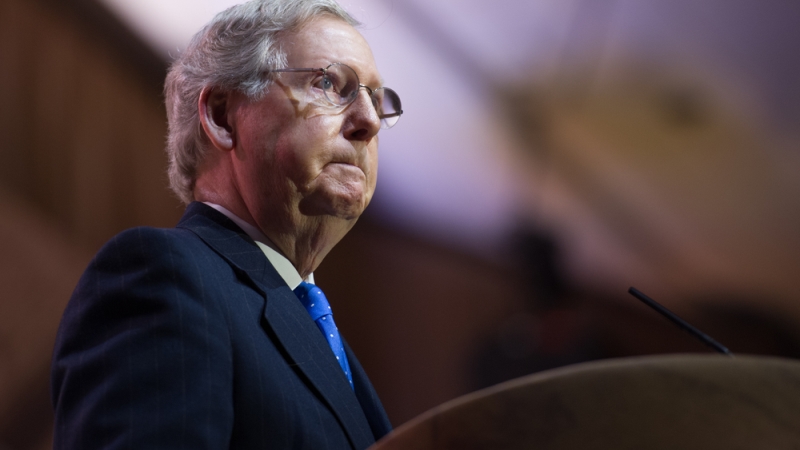 Senate Majority Leader Mitch McConnell, shown in 2014, said Monday, "“It defies belief that somehow Republicans in the Senate are somehow reluctant to review Russian tactics or ignore them.” (Photo: Shutterstock)

Senate Majority Leader Mitch McConnell, R-Ky., opened a news conference on Monday saying that recent allegations of Russia’s interference in the presidential election as well as the White House’s announcement of additional election cybersecurity investigations should be treated in a bipartisan manner.

“Obviously any foreign breach of our cybersecurity measures is disturbing and I strongly condemn any such efforts. Prior to the election the director of National Intelligence released a statement saying that the Russian government directed the recent compromises of emails from U.S. persons and institutions,” McConnell said. “That is what the intelligence community believes can be said in unclassified remarks without risking sources and methods. Anything else, anything else, is irresponsible, likely illegal, and potentially for partisan political gain.”

Though the Department of Homeland Security announced before the election took place that it believed Russia was responsible for hacks on DNC emails, some members of the intelligence community are reputedly more split on whether the goal was to tip the election in Republican Donald Trump’s favor.

Members of both parties have, however, called for investigation into the hack. Sens. John McCain R-Ariz., Lindsey Graham, R-S.C., Charles E. Schumer, D-N.Y., and Jack Reed, D-R.I., released a joint statement on Sunday saying, “Congress’ national security committees have worked diligently to address the complex challenge of cybersecurity, but recent events show that more must be done. While protecting classified material, we have an obligation to inform the public about recent cyberattacks that have cut to the heart of our free society. Democrats and Republicans must work together, and across the jurisdictional lines of the Congress, to examine these recent incidents thoroughly and devise comprehensive solutions to deter and defend against further cyberattacks.”

“It defies belief that somehow Republicans in the Senate are somehow reluctant to review Russian tactics or ignore them,” McConnell said.

McConnell also assured reporters that Senate committees would be reviewing the information to determine the full extent of what happened.

“Let me remind all of you that the Senate Intelligence Committee, on which I and the chairman of the Armed Services Committee sit as ex-officio members, is more than capable of conducting a complete review of this matter,” said McConnell. “Chairman McCain has announced that he will conduct a review within the Armed Services Committee of the threat that we face from cyberattacks.”

McConnell added that as the White House review and other investigations take place, more information will likely be made available to the public.

“We’re going to follow a regular order. It’s an important subject and we intend to review it on a bipartisan basis.” McConnell said.