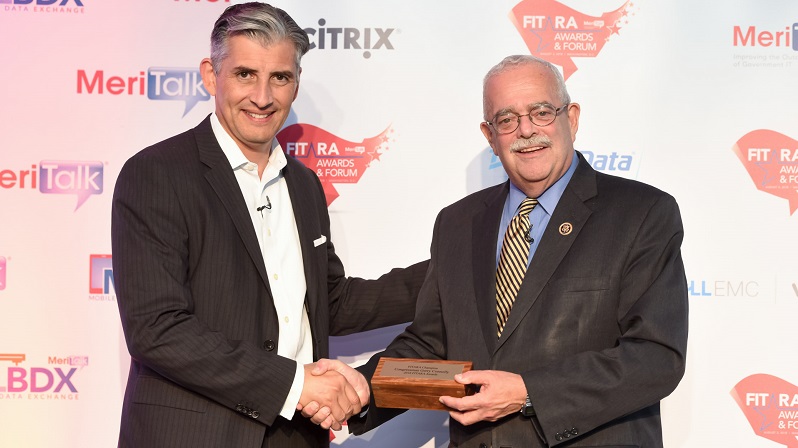 MeriTalk today announced the winners of its inaugural FITARA Awards program, recognizing six Federal agencies who have made tremendous strides in modernizing their IT environments and one congressional leader who has worked tirelessly to promote the reform of IT acquisitions and adoption of cyber best practices.

After the ceremony, agency leaders held a forum to discuss how the FITARA scorecard process can be improved even further.

The Department of Education (Ed) and General Services Administration (GSA) were jointly honored as the Best Overall award winners, both posting the highest marks across the FITARA 6.0 Scorecard’s various categories.

GSA credited a streamlined IT environment that has reduced operating costs, simplified technology, and fostered an environment of reusability and collaborative sharing for both employees and customers. As the leading agency in many Federal IT acquisitions, GSA has often been recognized for exceling in FITARA metrics.

Ed established a FITARA Implementation Working Group within the agency, which brought together key executives with responsibility over HR, Acquisitions, and other departmental functions that overlap with IT. By aligning and integrating these efforts to its technology initiatives, the agency has maintained excellent overall FITARA performance.

Four agencies were honored for their efforts to create more efficient IT infrastructure through the Data Center Optimization Initiative (DCOI), with all four receiving A’s in the category in the most recent scorecard. Ed and GSA received their second awards of the afternoon and were joined as DCOI category winners by the Department of Housing and Urban Development (HUD) and the National Science Foundation (NSF).

NSF has continuously evolved its infrastructure and services to meet the changing needs of the agency. It prioritized reducing reliance on an onsite data center years ago, which led to high marks in DCOI, one of the most keenly observed areas of IT reform in the Federal government.

HUD credited its transition of a contractor-owned data center environment in its Washington, D.C. headquarters to a government-owned Federal data center at NASA’s Stennis Space Center for increased efficiency in the agency’s infrastructure. HUD was also able to shut down all file and print servers across its national offices.

The Department of Health and Human Services (HHS) and U.S. Agency for International Development (USAID) were also recognized with honorable mentions for their notable work across the various categories of FITARA. Both agencies received four A’s each in individual FITARA categories.

HHS has one of the largest IT spends in the Federal government, presenting a challenge to achieving consolidated and efficient operations. HHS created a program called “A By May” and actively engaged its 13 operating divisions and senior leadership to enact change. The agency, which received poor marks just one scorecard ago, rallied around the new program to become one of the most improved agencies in Scorecard 6.0.

USAID remains the first and only Federal agency to receive an A on the overall FITARA Scorecard and credits a passionate technology staff for executing on a shared IT vision. USAID has excelled in part due to concerted efforts to partner with the Office of Management and Budget and Government Accountability Office to improve FITARA performance.

Finally, MeriTalk was very pleased to honor the godfather of FITARA, the co-author of the 2014 legislation of the same name, and vigilant Capitol Hill overseer of agency IT reform. Rep. Gerry Connolly, D-Va., chaired the FITARA Awards program and was a central figure in discussions with MeriTalk regarding the outstanding agencies honored today. Connolly received the FITARA Champion award for his commendable service to government technology innovation.

Connolly said his initial idea to propose a scorecard was “designed to incentivize people” and “empower agencies to come into the 21st century.” The congressman said he was glad that the agencies excelling in FITARA were being honored today, and expressed hope that their example would help make a difference in the future.

“We want the empowerment of CIOs…we want to see an evolution…we want to make a difference,” Connolly said.

MeriTalk and Congressman Connolly will recognize agency achievements in the FITARA 7.0 Scorecard, due out in November 2018, with a new round of FITARA Awards.