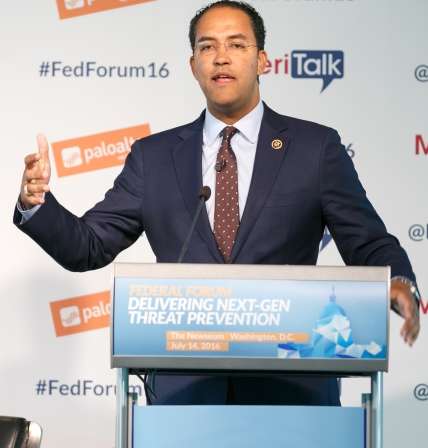 LAS VEGAS–As the chairman of the House Information Technology Subcommittee and a former private sector expert in cybersecurity, Rep. Will Hurd, R-Texas, became one of the 114th Congress’ leaders in information technology legislation and policy.

As the 115th Congress begins working on legislation, MeriTalk sat down with Hurd at CES Government to discuss his IT outlook for government in 2017 and some of his legislative objectives.

Hurd intends to introduce a bill similar to the one he proposed in the last congressional session, called the Modernizing Government Technology (MGT) Act, which passed the House, but got held up in the Senate for long enough that it didn’t make the end of the 114th Congress.

“We’re reintroducing something that’s going to look similar,” said Hurd, adding that he’s optimistic about getting support for the bill this time around. “There’s widespread support for the concept.”

Senate debate over the original bill was in part based on a Congressional Budget Office (CBO) estimate that implementation would cost $9 billion from 2017-2021.

“We’re going to get a bunch of folks together to see how we deal with the CBO issue,” Hurd said, calling the $9 billion estimate “ludicrous.”

Hurd also said that having someone like Rep. Mick Mulvaney, R-S.C., appointed as the budget director would be helpful.

“We are missing the point when it comes to what the Russians have done,” Hurd said of much of the recent discussion on Russia’s interference in the 2016 election, explaining that Russia’s objective in the hacks was likely to drive a wedge between the White House and the CIA.

A report released by the leaders of the intelligence community on Friday reaffirmed the conviction that the Russian government ordered the hacking against U.S. political organizations, and stated that Russia’s goals were to undermine confidence in the U.S. election system and to harm the chances of former Secretary of State and Democratic nominee Hillary Clinton while favoring Republican Donald Trump.

Hurd, who worked as an undercover officer in the CIA for nearly a decade, said that he has 100 percent confidence in the intelligence community, adding that it does not act as a politically motivated entity and is instead “the only entity standing in the way of imperialistic Russian designs.”

On Saturday the Department of Homeland Security designated the nation’s election systems as critical infrastructure, a concept that received mixed support during 2016 election discussions.

According to Hurd, this designation would likely fall under the Midnight Rule Relief Act, which recently passed the House and seeks to negate actions taken by the Obama administration in the last 60 days of his office. He added that because many of the state election officials opposed a critical infrastructure designation, some states would likely take the issue to the judicial system.

Hurd expressed support for changing or updating the voting machines that don’t produce a sufficient paper audit, but otherwise has confidence that the machines themselves present physical obstacles to hacking.

When it comes to voter databases, Hurd said that the motivation for Russian hacking of those databases was unclear.

“If the Russians wanted that data, they could have gotten it other ways,” Hurd said, explaining that much of that information is available for purchase anyway.

The Future of 18F

“I don’t know what the current plan is for them,” Hurd said of the new administration’s plans. He noted that 18F has effectively “hacked” the IT acquisition process. “18F has shown value in how they’ve hacked the procurement systems.”

In December, Hurd’s office announced the TX23 Computer Science Curriculum, a partnership between the University of Texas at Austin’s STEM Education program and Bootstrap that will teach middle school math teachers in Hurd’s district how to incorporate coding into their lessons.

“You train math teachers how to introduce coding into the curriculum,” Hurd said, adding that he wants to create an environment in which the next generation of workers has already been exposed to coding at an early age.