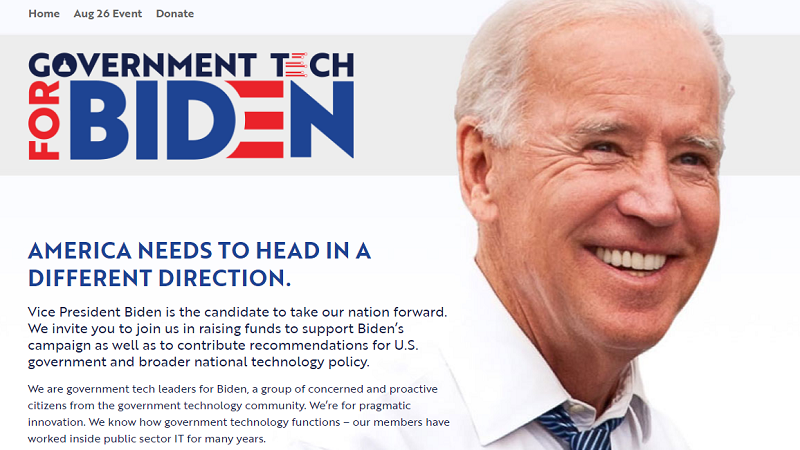 A group of government tech leaders that have joined together to support Joe Biden for President has kicked off its initial policy discussions, and is picking up steam on fundraising with its third event planned for August 26 headlined by Rep. Gerry Connolly, D-Va., chairman of the House Government Operations Subcommittee. Earlier GovTech4Biden fundraisers featured Tony Scott, former Federal CIO, and Chris DeRusha, Biden Campaign Chief Information Security Officer.

The GovTech4Biden August 26 fundraiser begins at 5pm Eastern time, and will feature an interactive format allowing attendees to participate fully.

Rep. Connolly, long a leading voice on IT and government workforce issues in Congress, is expected to discuss the upcoming presidential election, the tech policy agenda for the 117th Congress beginning in January, what he’s looking for in the next Federal CIO, and lessons from the pandemic experience.

GovTech4Biden has attracted a diverse set of members under the banner that Biden “is the candidate to take our nation forward.”

The group is headquartered in the Washington, D.C. area, but is engaging with other tech communities across the country, from Silicon Valley, Austin, Research Triangle, and Boston. “Our goal is to raise money for the campaign and ensure that the technology community has a voice at the table in the Biden Administration,” the group said.

The group said it favors “pragmatic innovation” centered on improving citizen service and generating strong returns on taxpayer investments. “We know that the technology community has a huge role to play in supporting Vice President Biden’s campaign – and helping him frame his government technology approach when he takes office,” the group said.

Among its members are Steve O’Keeffe, founder of MeriTalk, and former Federal CIO Tony Scott.

“GovTech4Biden demonstrates the importance of technology as a key enabler of modern government services, and the enthusiasm that individuals associated with the gov-tech sector have for Biden/Harris leadership in this critical area,” Scott said.

Sign up for Wednesday’s fundraiser with Congressman Gerry Connolly.