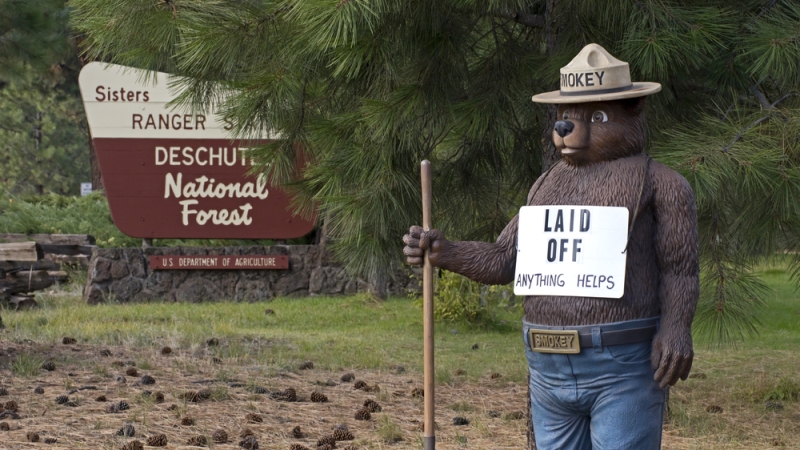 Smokey the Bear displays a message at the U.S. Forest Service office in Sisters, Ore., during the government shutdown in October 2013. (Photo: Ginger Livingston Sanders, Shutterstock)

The Federal government will probably avoid a shutdown Friday as Congress continues to deliberate the final funding package.

“The expectation is that we won’t have even a partial government shutdown,” Hettinger said in an exclusive interview with MeriTalk.

Federal employees are compensated after government shutdowns, but Federal contractors are not. For this reason, Hettinger said these shutdowns are especially harmful to contractors. Shutdowns can also affect IT projects that require periodic maintenance, such as data centers.

Anders Maul, marketing manager at LiveStories, said a common understanding of pertinent data can resolve some of the disagreements between members of Congress, including many of the rifts stalling the current funding bill. LiveStories, based in Seattle, is a company that produces data storytelling platforms. Maul said their goal is to work with governments and communities on data-driven decisions.

“Congressmen have different ideologies, and that’s great, but they disagree on some of the data around them. I don’t think that’s something that will be solved in the next couple of weeks,” Maul said. “They don’t have common ground. We’re helping government make data-driven decisions and take it from there.”

LiveStories primarily works with city and county governments on open data projects, and forays into Federal partnerships only when agencies approach the company. A recent Federal customer is the Department of Defense, with whom LiveStories partnered for Data.mil, an open data platform launched in December that made Korean War information publicly available for the first time.

Maul said it is important for Congress to work from trusted, accurate data. “Bring all disparate parts of the government into one place and have everyone at the same speed,” he said. “That is our hope—a shared platform where they can access data quickly.”