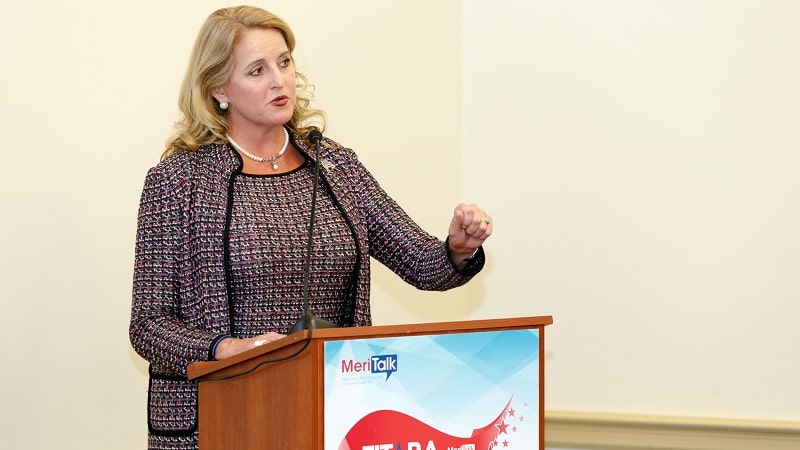 After a two-and-a-half-year tenure widely recognized for success in promoting Federal IT modernization – and superb performance in shepherding the government’s quick turn to telework during the COVID-19 pandemic – Federal CIO Suzette Kent said today she will step down from her post next month.

Kent announced her plans at an Office of Management and Budget (OMB) team meeting Thursday morning, and made clear that the mission remains in good hands.

“It is with great pride in results delivered and confidence in [Deputy CIO] Maria Roat, [Federal CISO] Grant Schneider, and [Chief of Staff] Jordan Burris’ leadership, the OFCIO team, and the leaders in the CIO Council that I depart. It has been an honor and a privilege to serve our nation,” she said.

“My commitment was to give 100 percent to improving government technology and citizen services. It is my hope that the outcomes achieved stand in evidence to that commitment,” Kent said of her departure.

Kent took the reins as Federal CIO in January 2018, and is the fourth person to serve in that capacity.  She aggressively implemented the President’s Management Agenda issued later that year aimed at advancing broad Federal IT modernization goals, and earned widespread praise from Federal CIOs for leading the government’s shift to telework during the COVID-19 pandemic.

While Maria Roat, former CIO at the Small Business Administration, was recently tapped to fill the deputy Federal CIO role, it is unclear who will replace Kent.

In an interview with MeriTalk today, Kent said the pace of Federal IT modernization still needs to accelerate further.

“Keep going, and go faster” on modernization efforts, she offered when asked to provide advice to her successor. And she emphasized that agencies can’t do it alone.

“We need Congress with us, because one of the things that we fight with is that big transformation takes multiple years. And the way that we fund transformation in the government in a single-year manner doesn’t fit with making the kinds of changes that we aim for,” she said.

“That’s why we’ve tried different vehicles like the Technology Modernization Fund, like working capital funds for agencies, and other ways. But we need to align the resources with the common journey of any kind of technology,” Kent said.

The Federal CIO offered praise to all who have helped advance the cause of modernization, saying, “It’s been and honor and a privilege to work with such an incredibly talented group of people – both inside the government and the partners that we work with – that are passionate about modernizing government technology. That’s because it’s meaningful to how we serve citizens of our nation.” She added, “I hope that much of the impact from bringing pace, and energy and practices from private sector continues.”

“One of the things that I have been most excited about has been to work with the CIO Council, and the coordination between the CIO and CISO councils, and the new Chief Data Officers (CDO) Council – and the ways that we have driven new collaboration across government to accelerate you big efforts.  That’s been some of the most exciting things I’ve had the opportunity to do,” she said.

Looking forward to the continued maturation of the agency CDOs in government, Kent called those efforts “an important part of the entire wave – our technical capabilities, automation, artificial intelligence (AI), and more efficient applications and systems, period.”

“Platforms rely on data, and our society is demanding that we are a data-driven government,” she said.  “And to do that, we need to manage the data well, accessibility needs to be there.  This pandemic drove home that consistency of data, and data sharing protocols, are important in everyday decision making and big decision making. We have to continue the investments there, side by side with the technology.”

The government’s work in the COVID-19 pandemic, she said, has “clarified and unified focus on so many important things.  As a citizen, I am so excited to see and be the recipient” of what the team at OMB does next.

As for her next steps, Kent said, “My passion has always been, and my career will always be, about large- scale transformation and complex problems, and how we create a better world.”

“I want to thank Suzette for all of her work on behalf of the president,” OMB Acting Director Russ Vought said. “During her time at the White House she’s had a remarkable impact on agencies’ operations, helping to drive critical modernizations through the President’s Management Agenda. On behalf of the entire Office of Management and Budget, I want to express my deepest gratitude for Suzette and wish her all the best in this next chapter.”

Tony Scott, who was Federal CIO from 2015 to 2017, offered his own advice to the departing CIO in an interview with MeriTalk today.

“My advice is to take a couple of months and breathe,” Scott said. “Having been in the role, I found that was the most helpful thing to do after what is really a very intense job.”

“I think Suzette has done a great job, and I particularly appreciate the work that she did on getting telework to be the norm in government,” he said. “That’s a crisis that hits and you just have to execute like crazy, and I think she’s done a great job on that.”

“I think the longer term impact of her tenure will be some of the data initiatives, the work on the Modernizing Government Technology (MGT) Act and the Technology Modernization Act funding, and the Chief Data Officer Council.  There’s a pretty good list of things that were advanced quite nicely during last couple of years under Suzette’s leadership so I give her high marks for moving that agenda forward.”

And Scott seconded Kent’s endorsement of the team at OMB, saying, “The team that is there now with Maria and Grant leading those efforts in the interim, they are great people. I think they’ll continue the good work that is ongoing.”

“Whoever the next CIO may be, under any administration, is going to have a continuing set of daunting challenges about how to continue and accelerate the pace of modernizing technology in the Federal government,” Scott said.

“I think the COVID crisis has put a spotlight on some of those issues and created greater awareness, not only in the administration but also in Congress, which is where ultimately things get resolved in terms of funding and resource allocation.  Whoever is in the role next is going to have to have a strategy in terms of how to deal with those realities,” Scott said.

Within the Federal agency CIO ranks, Kent’s performance during the pandemic has drawn consistently high praise.

Speaking with MeriTalk today, Energy Department CIO Rocky Campione said, “I have appreciated Suzette’s wisdom and leadership in the role of Federal CIO.  Her leadership during the time of maximum telework has made a difference to not just the government IT community, but the American people.”

“She has been a very big supporter of SBA in efforts to modernize the TIC and CDM programs through use of the cloud. She’s the one that provided OMB support behind our effort, which allowed us to also address the PMA. Those are two programs in which her leadership has been key to our success,” said Guy Cavallo, Deputy CIO at SBA.

“During the pandemic, she helped us do our emergency purchase of computers as we nearly quadrupled the size of SBA to deal with the billions of dollars of PPP and EIDL loans. That’s more administrative, but it also illustrates just one of the areas where she stepped right in and helped us when we needed it,” he said.

GSA Administrator Emily Murphy said, “Suzette has been an amazing partner on the Sharing Quality Services CAP Goal, the TMF, IT modernization, the CoEs, EIS adoption, and a myriad of other programs and initiatives. On behalf of all of us at GSA, we will miss her technical expertise and her passion for progress.”