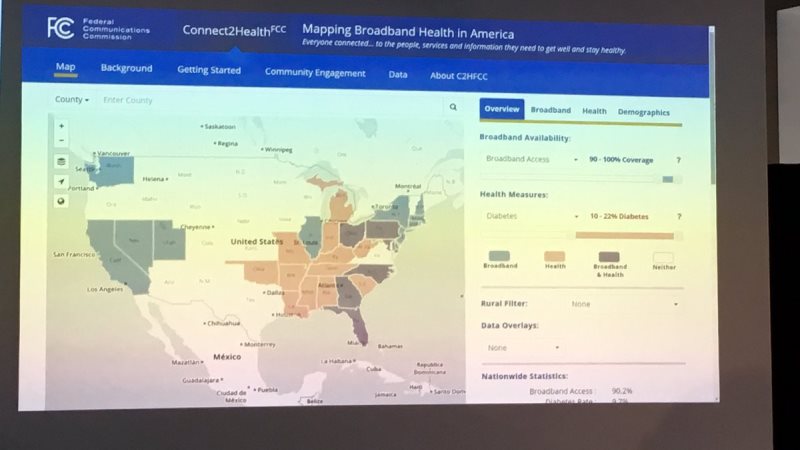 “It becomes a powerful storyteller,” said FCC Chairman Tom Wheeler. “It becomes a story of what is possible and what is needed.”

The map of the United States, which is available on the FCC website, tracks the prevalence of chronic illness such as diabetes and obesity in each county and integrates that with data on broadband availability and whether the county is rural or urban.

Mignon Clyburn, FCC Commissioner, has family members who were diagnosed with diabetes. Her grandfather lost two limbs due to the disease and her mother continues to manage the disease. Clyburn appreciates the outcomes that could result from tracking data on diabetes and broadband.

“Most of what makes you healthy is outside the doctor’s office,” said Georges Benjamin, executive director of the American Public Health Association (APHA).

The APHA’s goal is to make the United States the healthiest nation in one generation. Benjamin believes C2H will help with that goal. Broadband increases education in that students are able to have access to online resources to complete homework. Educated people participate in fewer unhealthy behaviors, such as smoking. Therefore broadband can increase health, according to Benjamin.

Broadband can also facilitate communication about regional diseases such as the Zika virus to those who live in areas where they need information on the disease, according to Benjamin.

C2H will provide data to lawmakers and industry professionals in order to ensure that helpful policies and resources are targeted at the right counties.

“It will change the paradigm of how we invest and how we fund out interventions,” said Robert Carr, president-elect of the American College of Preventive Medicine.

C2H contains a map where health information technology startups can research areas with certain access to broadband and specific health issues. That way, these companies will know the best locations to launch their products.

As the aging population in the United States grows, patients need programs to help fight chronic disease, according to Ken Thorpe, chairman of the Partnership to Fight Chronic Disease (PFCD).

“Technology is often the center of these solutions, but for those solutions to reach all who could benefit, broadband connectivity is essential,” Thorpe said in a statement.

C2H also has the ability to import external data for users to compare other variables with the existing datasets. For example, users can research how the data changes in counties with a high number of veterans or people with disabilities.

“We’re the broadband agency,” Wheeler said. “The reality of broadband is that everything it touches is transformed.”