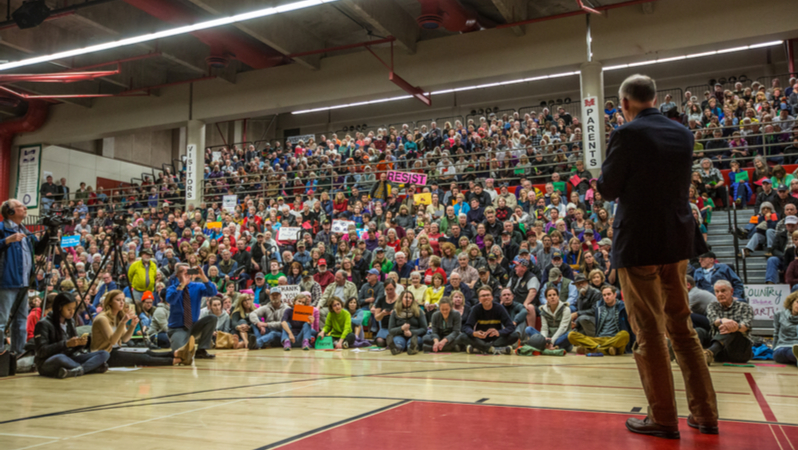 Experts in constituent communication explained the reasons behind distrust of members of Congress, and provided technological methods of improving meaningful engagement between constituents and members at a June 5 House Committee on the Modernization of Congress hearing.

Ohio State University Political Science Professor Michael Neblo said that most discontent comes from their sense of disconnection from their representatives’ work and their belief that politics exclusively responds to organized interests rather than those of regular citizens.

That lack of communication between policymakers and citizens is real. Brad Fitch, president and CEO of the Congressional Management Foundation (CMF) – a nonpartisan organization that works with members of Congress and citizen groups to increase citizen trust and engagement with Congress – cited CMF’s finding that the House alone receives between 25 and 35 million messages a year from constituents, and that 75 to 95 percent of those messages are facilitated by interest groups and nonprofits with constituents in members’ districts.

Those mass email messages, Fitch added, are devoid of meaningful idea exchange and aren’t effective in shaping policymaker stances, which reinforce Neblo’s findings of a disconnect between citizens and members of Congress.

“One study of congressional offices indicated that more than half of the members of Congress are not reading the mass mail reports of these campaigns coming into their offices, and … open rates by the constituents who receive these responses show that the average open rate is under 40 percent,” Fitch said. “Half of the mail going to Congress isn’t being read by members, and half of your replies are being ignored by constituents. That’s the definition of a system sorely in need of reform.”

Marci Harris, a developer of constituent engagement tools and former congressional staffer, added that constituent distrust is proliferated through the rise of national and partisan news networks and social media, which especially “opened the floodgates for trolls and misinformation.”

Although mass email has overwhelmed Congress with messages it can’t fully absorb and technology has largely participated to the dissemination of misinformation, partisan division, and feeling of disconnect with constituents, Harris said that technology can also be the key to addressing the problem.

Fitch presented three suggestions for Congress to take, which involved leveraging technology. First, he said Congress should update the frank – a 1775 congressional authorization that grants members to inform their constituents – by creating a task force of current press secretaries to examine and recommend changes.

Second, Fitch said Congress should incentivize practices and technologies with credible track records to improve citizen engagement. And third, Congress should look at preexisting creative solutions it has to examine and adopt in its solution.

Neblo further added that traditional methods of communication, like mail, email, and phone calls, will not be helpful in addressing issues of constituent engagement, particularly because of the way activist and interest groups have monopolized those forms of outreach with mass, cookie-cutter email messages.

Neblo ran a collaborative research project, Connected to Congress, which created online town halls to test how carefully designed technology can help build communication and trust with constituents. These sessions had bipartisan members participate, as well as a diverse group of constituents.

By focusing on a single topic, preemptively providing balanced and factual material for participants to consume, having a neutral third-party host and moderate, and having elected officials participate through live stream, Neblo’s online town halls yielded positive results.

More specifically, over 95 percent of participants said they felt the online town hall was valuable, and over 97 percent said they would participate in another, according to Neblo. In addition, 37 percent indicated increased trust in members after the town halls, and members saw a 35 percent increase in job approval.

Although Neblo offered one solution, Harris added that expanding the field of vendors who can offer innovative solutions to Congress is also critical. Furthermore, she said that solutions should balance public participation and data use to tie constituent sentiment and data-backed evidence in policymaker decision-making.