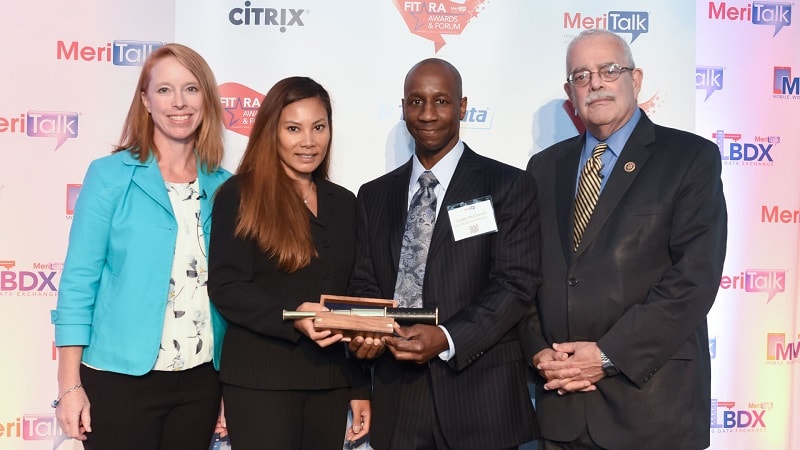 Walter McDonald and Ann Kim of the Department of Education accept a FITARA award with MeriTalk's Caroline Boyd and Rep. Gerry Connolly

UPDATE: This story has been updated following a clarification from Walter McDonald, director of IT Program Services, Department of Education.

The General Services Administration has tapped the Department of Education to share with other Federal agencies Education’s successes in adopting the Technology Business Management (TBM) framework to arrive at a holistic understanding of IT processes, according to representatives of Education’s Office of the CIO.

The representatives, speaking at the Digital Government Institute’s 930gov conference today, added that GSA is getting ready to release a TBM playbook in the next month, informed by some of the lessons learned by early TBM adopters–including Education–at Federal agencies.

“It should be within the next 3-4 weeks that we come out with something to help those who are getting ready to depart on that journey,” said Walter McDonald, director of IT Program Services at Education.

McDonald later spoke to MeriTalk and clarified that the potential GSA release is a draft publication, and within roughly three to four weeks, GSA will send the draft to Education for their comment and potential refinement. The public release of the TBM playbook has not been set.

McDonald said his agency’s contribution to that playbook, following GSA’s outreach, has been to share the approach, lessons learned, quick wins that can be gained through TBM adoption, and partners who have helped the agency implement the IT taxonomy.

TBM provides a standardized way to categorize IT costs, technologies, resources, applications, and services, as well as informing data-driven decision-making around smart IT investment. The quick wins for McDonald’s agency have included better governance, cost transparency, and the immediate ability to identify some of its public-facing web services for consolidation, he said.

Federal CIO Suzette Kent said earlier in the day that the Federal government received more than 80 vendor applications and 400 feedback points from a recent TBM request for information, as interest and focus in applying the taxonomy across the Federal enterprise grows.

Steven Corey-Bey, chief enterprise architect at Education, explained that TBM is being used at the agency in combination with a unique IT visualization tool that has allowed Education to arrive at a much more robust understanding of its expansive IT environment.

The result? Better alignment with business units, better funding, security, and proactive changes to cut down on the complexity of the agency’s IT architecture.

Corey-Bey said that TBM and the visualization tool are now providing a “picture of ground truth in every major component in the department.”

“I cannot over-emphasize how major that is,” he said. “How many people know what your business looks like? What the systems and process are that support your business, that you have a reliable picture of that.”

In his agency’s case, it turned up “around 284 IT systems and services spread across five different environments,” 25 cloud service providers (CSP), and a “lot of fragmentation,” he said.

Corey-Bey said the roadmap for the future is clear. Education aims to go from 25 CSPs to eight, and 284 systems to around 140. He said that these changes will work to decrease the agency’s attack surface and contribute to better overall cybersecurity.

“OMB [Office of Management and Budget] knows about this project,” Corey-Bey said, adding that it has not only led to the administration urging Education’s business units to support in-house IT efforts, but that OMB aims to replicate the agency’s TBM and visualization roadmap across other agencies.

McDonald clarified that OMB is not mandating TBM adoption based on Education’s success, but that they hope their successes can potentially aid the broader Federal IT space.

“To see you get to influence what OMB tells the agencies based on something you’re doing, that’s a major, major win,” he said.