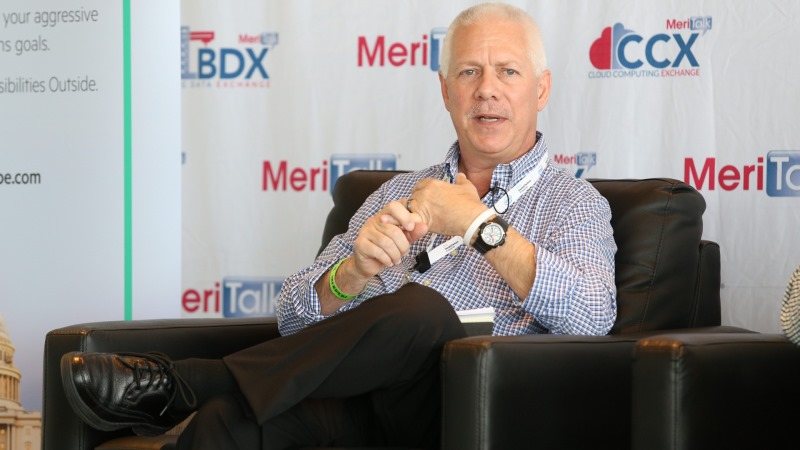 Pruitt Hall, project manager of the DCIM implementation at NASA JPL, makes a point at the Roadmap: Tomorrow's Data Center in a Cloud-Driven Digital World audience on Oct. 24, 2017, in Washington, D.C. (Photo: David Keith for MeriTalk)

In order for agencies to meet Data Center Optimization Initiative (DCOI) requirements, many are choosing Data Center Infrastructure Management Solutions to help them visualize what’s going on inside their data centers.

“We were looking at optimization before DCOI and DCIM was cool,” said Pruitt Hall, project manager of the DCIM implementation at NASA JPL, at Hewlett Packard Enterprise’s Roadmap: Tomorrow’s Data Center in a Cloud-Driven Digital World event, produced by MeriTalk, on Oct. 24. “Our mantra would be: How could you not optimize your data centers?”

Hall said that his department at NASA JPL took about a year to decide on a DCIM solution with more than 150 selection criteria. Eventually Hall’s team went with Nlyte.

“We actually had a vendor say ‘ya’ll were tougher than Gartner,’ ” Hall said.

Pruitt said he continues to deal with a cultural shift when it comes to optimizing data centers. This involves getting the IT team and facilities teams to work together.

“Who is the mortal enemy of IT?” Hall said. “Facilities. We never get along.”

Hall said that using DCIM solutions is one aspect that both the IT team and facilities teams can get behind, but he still struggles with getting the IT team off spreadsheets. Hall said that NASA JPL began managing data centers as if they were outsourcers, which was a successful approach.

Tom Wilson, principal consultant for Data Center Facilities Strategy and Consulting at Hewlett Packard Enterprise, said that agencies should go in with a strategy when they begin to use DCIM solutions. For example, Wilson said to look for hardware that has a more efficient power supply.

“You don’t have to buy the biggest honking hardware,” Wilson said.

Wilson said that agencies have trouble deciding what data centers they consolidate. DCIM tools give agencies the data to help them make those decisions.

“It has to do with risk in the government world,” Wilson said.