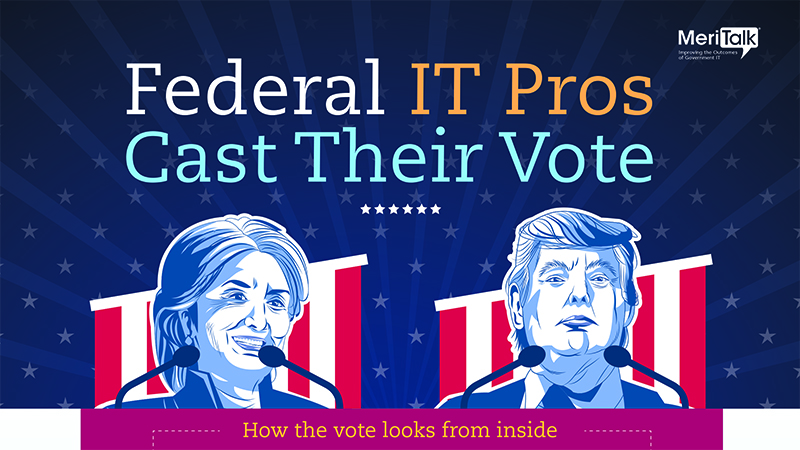 Federal IT offices may be at least 24 percent less crowded when CIOs, systems engineers, and data center managers show up for work on the day after Election Day. While most Federal IT professionals plan to vote for Hillary Clinton, they will probably lose colleagues and bosses regardless of who is elected president.

MeriTalk surveyed Federal IT employees for this study, 63 percent of whom work for civilian agencies. The other 37 percent work for the Department of Defense or Intelligence agencies. Twenty-seven percent of the responders are non-management IT professionals and 21 percent work as IT directors or supervisors. Forty percent are Republicans and 38 percent are Democrats. Sixty-four percent are male and 70 percent are white.

According to the Professional Services Council’s (PSC) Agenda for the Next President, released Sept. 15, the next commander in chief should mandate IT modernization for the Federal government. The report, supported by PSC members from Grant Thornton, IBM, Deloitte, and others, states that agencies should adopt cloud computing and stop relying on outdated technology.

“Aging IT infrastructure creates a host of problems for government, including spending too much money, falling behind on cybersecurity, and being unable to take advantage of new improvements, innovations and delivery channels,” the PSC report states.

Only 3 percent of MeriTalk’s survey population said that cloud computing should be the next president’s top IT priority. Sixty-seven percent of respondents said that cybersecurity should be the top IT priority, while 19 percent said IT modernization, 10 percent said tech spending and acquisition reform, and 1 percent said partnering with Silicon Valley. The PSC report also states that officials should avoid the “Silicon Valley Only” mind-set and rely on current providers to offer innovation instead.