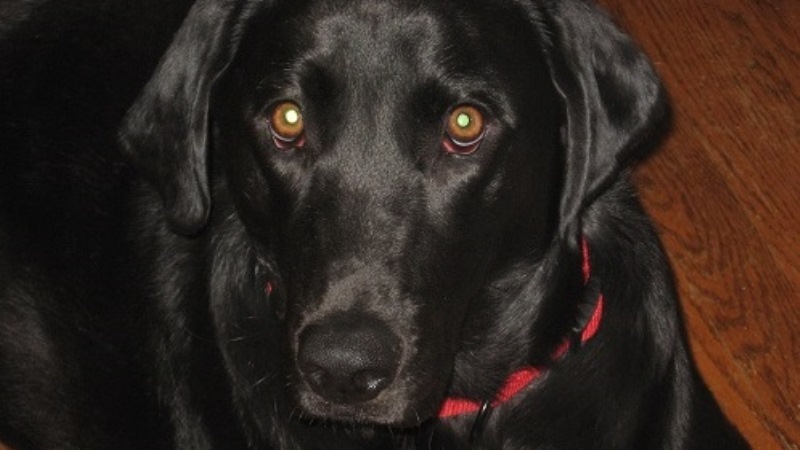 The nose of a female Labrador retriever, like this one, was the model for a plastic nose that tests the effects of a dog's aerodynamic reach. (Photo: Linda Tufano, MeriTalk)

People who design explosive detection devices may have something to learn from their canine counterparts, according to Matthew Staymates, a mechanical engineer and fluid dynamicist at the National Institute of Standards and Technology (NIST).

Over the past few years, Staymates and his colleagues have been researching ways to improve explosive detection. Staymates turned to detection officials’ partners, namely dogs, for ideas. He said the way dogs inhale and exhale could provide an aerodynamic clue for how to model detection devices in the future. Detection devices, such as the ones used at airports, use wand-like tubes that suck in air through a little hole. The devices feed that air into an analyzer. Suspicious chemicals go undetected unless the vacuum-like device scans directly over it.

Dog noses, on the other hand, can cover a larger swath of area in less time. Staymates explained that dogs can propel air jets away from them, and then pull other jets of air toward them as they inhale. Dogs’ “aerodynamic reach” pulls odorants toward them, enabling the animals to cover more ground than human detectors.

“We don’t do it the way a dog does it,” Staymates said. “A dog is an active sampling system, and pulls new vapor toward itself. There are lessons from learning what a dog is doing.”

To test the effects of a dog’s aerodynamic reach, Staymates decided to replicate one. He used a 3-D printer to create a plastic dog nose based on a female Labrador retriever’s snout. The lifelike plastic nose, which resembles a mask, cost less than $5 to make. Staymates and his team retrofitted their model nose to a commercial vapor detector and used schlieren imaging, an aeronautical engineering technique used to view the flow of air around objects, to confirm that their false nose functions much like a real dog’s.

Staymates and his team tested the air-sampling performance of their creation, which “actively sniffs” like a dog, to a trace detection device that relies on continuous suction. Trace detection refers to picking up small, non-visible remnants of a substance. Using a mass spectrometer, Staymates found the sniffing artificial dog nose was four times better 3.9 inches away from the vapor source and 18 times better at a stand-off distance of 7.9 inches.

While the dog nose model gave Staymates a clue as to how aerodynamics could shape future detection devices, he stated he still does not know how that technology will physically manifest in the future.

“We’re not going to replace the real dog. But they get tired and cranky and hungry,” Staymates said. “I don’t envision the next generation of devices will look like dog nostrils. The relevant thing is the holes for the air. I see this working well in the world of trace detection.”