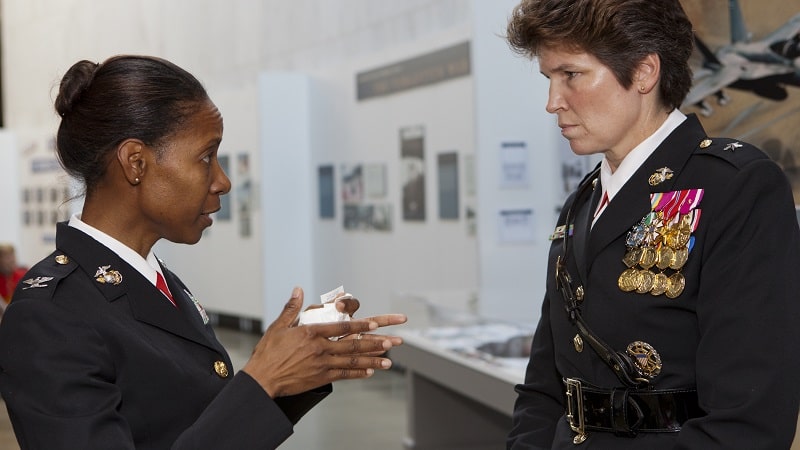 “We’re getting a lot of talent, it’s do we have the processes, the procedures, and do we have the institutional thinking in place to harness that talent,” Mahlock said Monday at an event organized by the Armed Forces Communications and Electronics Association.

She provided anecdotal evidence, referencing an example from when she served as a group commander in the Pacific. Mahlock explained that she had difficulty “articulating the risks” to her commanding officer about the current environment, due in large part to a clunky bureaucratic process.

At the same time, enlisted Marines with junior ranks–a private, two privates first class, and one sergeant–and “a great civilian military spouse” were “locked in a room with some dirty internet, and in 30 days, less than 30 days, they produced an app that had strategic impact.”

“The talent that we’re getting into the service, that’s not the challenge,” Mahlock said. “It’s how do we cohese, how do we harness that talent, and how do we not be the impediment at [the senior level].” Mahlock added that “there’s a lot of recognition at the senior level in our service that we’ve got to get after it.”

She explained that as artificial intelligence, machine learning, and other emerging technology increasingly address the pressing needs of forward-deployed troops, the imperative to utilize talent properly will take on even greater importance. “We may need to grow that capacity and capability in the services, so we’re working on that also,” she said.

This notion, that the right talent is actually available, seems to counter the prevailing sentiment across the Federal space, where agencies–defense organizations included–have bemoaned the lack of qualified IT and cybersecurity personnel.

Last week at a Senate Armed Services hearing, Defense Department officials keyed in on the lack of workforce availability as a strong detriment to the overall cyber force. DoD Principal Deputy CIO Essye Miller said that DoD had lost around 4,000 cyber workers in just the past year on the civilian Defense side.

But during that same hearing, DoD Principal Deputy Cyber Advisor Dennis Crall explained that the recruitment messaging coming out of the service branches is likely a bit stronger than civilian DoD. The strength of the Marines’ message could explain why Mahlock sees the playing field just a little bit differently.

“We’ve got a culture, we’ve got an ethos that is uniquely Marine Corps,” she said. “We’re looking for people that want to do damage to the enemy in cyberspace, and we’re looking at the models to get those folks.”

Mahlock explained that “we need different people” when it comes to “the cyber workforce piece.” She believes that those workers do exist. While the Federal government fears they may be flowing out into the private sector at an alarming rate, Mahlock says creating organizational flexibility might prevent that problem and help cultivate even more talent in the service branches.

“There’s a lot of talent out there, the challenge for us as an institution is, are we agile enough, are we open enough in our thinking to leverage that talent,” Mahlock asked.