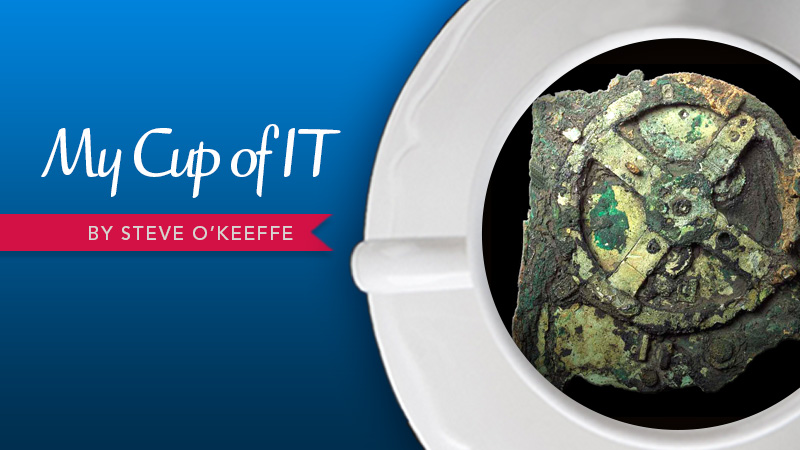 What was the first computer? George Stibitz’s Model K, Packard and Hewlett’s 200A, Alan Turing’s Colossus?  None of the above.  Believe it or not, the ancient Greeks beat the Geeks to the punch by more than 2,000 years.  Dating back to 205 B.C., the Antikythera Mechanism is an ancient analog platform that computed the orbits of the planets and the timing for the Olympics.

So, as the House Oversight and Government Reform Committee conducts its archaeological spadework to unearth ancient Federal IT systems – consider, things could be worse.  OGR asked the 24 Cabinet-level agencies for an audit of their legacy systems and migration plans by January 29.  Capitol Hill tells us many agencies missed the deadline – but most of the 24 have now submitted their reports.  Some interesting insight from Dave Powner, IT lead at GAO, at the MeriTalk FITARA Forum and Data Center Brainstorm.  Based on agency reports, agencies are running more than 10 million lines of COBOL and Assembler code – and these hieroglyphics power many mission-critical functions.  Powner pointed to the two-year average Federal CIO term as the enemy of real change.  IT execs look for quick wins – which means they avoid entering the mummy’s tomb.  Powner sparked that these ancient systems are either a huge cyber liability or as safe as houses – who’s writing viruses for this stuff?

Back away from the details, this is clearly a call for governmentwide leadership.  Keep an eye out for the May/June OGR hearing on Uncle Sam’s geriatric IT.  We’ll doubtless see some shocking examples – but to be clear, this is not about beating up on agencies, it’s about incentives and changing the failing status quo.  That said, everybody’s curious to see the details in the agency reports.  Here’s hoping OGR makes the data public.

While OGR’s not focused on DoD’s legacy IT battles, seems the services have their own issues.  A March 29th DoD IG report titled DoD’s Efforts to Consolidate Data Centers Needs Improvement says the Pentagon did not meet its FDCCI requirement to consolidate 40 percent of its data centers by year end FY2015.  Of the 3,115 data centers in DoD’s Data Center Inventory Management system, it only closed 568 – that’s 18 percent.  The report lays the blame at the DoD CIO’s doorstep, citing failure to revise plans or enforce compliance.  The report drills down to review Army, Marine Corps, Navy, and DISA data centers – but leaves the Fly Boys’ facilities out of the review because the Air Force acknowledged it severely underreported the number of data centers it owns and operates.  Seems the military needs more discipline …

Ironically, the timing of the DoD IG Data Center report coincides with the release of the recent MeriTalk Flash Forward – The Future of the Federal Data Center study that shows Uncle Sam could save $10 billion by modernizing the IT power processing plants.  The report tells us just 11 percent of Fed IT managers believe their data centers are properly equipped to meet their agency’s current mission demands.  Drilling down on crosstabs from the study, only 6 percent of DoD respondents noted their agencies’ data centers are properly equipped for current mission needs – versus 14 percent of civilian respondents.  Interestingly, DoD respondents assert that they’re less likely to comply with Cloud First by 2021 – 45 percent project cloud compliance, versus 65 percent of their civilian counterparts.

So, how do we break Uncle Sam’s morbid addiction to the past?  Clearly, it ain’t that easy.  The $3.1 billion revolving capital fund may help – but if directed under 18F at GSA, that may be history.  We need a better FedRAMP process to secure cloud transition – the PMO at GSA’s still all at sea.  We need firm executive commitments to tomorrow – incenting CIOs to exhume living-dead systems and stab them through the heart.  FITARA has a chance to play the hero.  But right now, like the Antikythera Mechanism when Jacques Cousteau first found it, seems a good part of Federal IT’s under water on legacy migration.