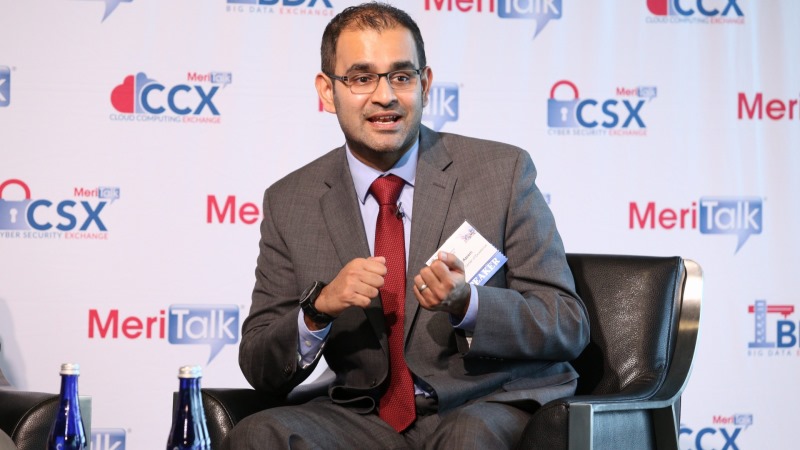 A shift to the cloud offers government agencies an opportunity to embrace digital transformation, add automation, and rethink processes, said Federal IT panelists on Wednesday at MeriTalk’s 2018 Cloud Computing Brainstorm.

“One of the goals of the administration’s Presidential Management Agenda (PMA) is shifting from that low value work to higher value work. One of the key capabilities that cloud can enable is more automation,” said Syed Azeem, a senior IT project manager for the General Services Administration (GSA).

Azeem noted how he uses a scheduling service that utilizes artificial intelligence to find convenient meeting times without the hassle of going back and forth over schedules. “The end goal is to have minimal tedious, painstaking processes, but even now there’s technology out there that’s going to help drive the to work to more high-value.”

“How many developers who wanted to do cool things have been held up doing point updates to things? Nobody goes to…engineering school or computer science school to not do cool stuff,” said Larry Gillick, deputy director of digital strategy at the Department of the Interior. Gillick noted that using cloud servies freed up Interior Department developers to focus on new projects, rather than maintenance tasks.

“Twenty percent of time spent in professional environments is just on finding information. One of the opportunities I see is information finding the worker, as opposed to them looking for it,” said Azeem.

“It’s shifting from a program basis to a rationalized, decision-making process,” said Jason Howe, chief technology officer and chief cloud architect in the A1 CIO support unit for the Air Force.

Howe noted how the variety of cloud offerings has led to a focus on application rationalization, including a new data office in his organization. “If you’re struggling with decision-making, it tends to break down everything after it about getting to the cloud.”

But the shift to cloud services does not come without its challenges, panelists said.

“Shifting and lifting infrastructure into the cloud is not digital transformation,” said Jose Padin, director of public sector sales engineering for Citrix. “Digital transformation is really around changing the experience, the service, and the capabilities you have.”

“Can industry provide me a seamless user experience when I have 10 software-as-a-service (SaaS) offerings? I don’t think we’re there today, but those are some of the things we talk about,” said Howe.

Gillick emphasized that new tools must be adopted by end users for them to have a positive impact. He pointed to shared documents as an area that uses cloud and improves processes, but has struggled to gain employee adoption. “I’ve still got people who will turn something into a Word document and pass it around. Why did you unwind my Google Doc?”

Gillick also noted the difficulty of balancing user convenience in the cloud with security concerns and regulations. “It’s not that there isn’t a FedRAMP-approved provider of whatever service you’re trying to have, it’s a much smaller number than you would want, if you’re the buyer. There’s this giant speedbump,” he said.

“FedRAMP can only solve part of the problem,” added Azeem. “The bad guys aren’t going through the annual process when they’re attacking us. We do need to change our process and the way that security is governed in the cloud space. I see it improving but I don’t think it’s there.”