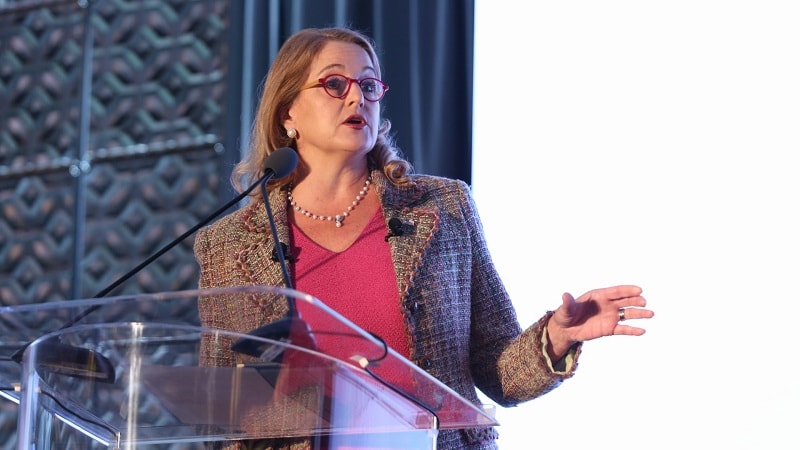 Federal CIO Suzette Kent said today at ACT-IAC’s Imagine Nation ELC 2019 event that her office’s major goals for Fiscal Year 2020 center on improving service to citizens through a variety of means, and “unleashing” the power of data across the U.S. economy.

In an opening keynote address at the ACT-IAC conference, Kent emphasized the broad goal of improving citizen service, and having the Federal government tackle that job with “united purpose.” She added, “that’s when we achieve great things.”

Focusing on more discrete goals for FY2020 that began Oct. 1, Kent said that “continued IT modernization” remains at the top of her office’s priority list. The broad goal includes components of continuing Federal agency migration to the Enterprise Infrastructure Solutions (EIS) contract, further adoption of cloud services by agencies, and more application rationalization. “Those will continue to be at the top of our agenda,” she pledged.

On the data front, Kent said support for artificial intelligence (AI) research and development is also high on the priority list. She said to expect the release of an AI “year one” plan from her office “pretty soon.” President Trump in February of this year issued an AI executive order that focuses on prioritizing Federal government investments in AI-driven projects, and development by Federal agencies of R&D budgets for AI that will support their core missions.

The Federal CIO also said cybersecurity issues will remain high on her office’s agenda, with focus on supply chain security, among other areas. And she said promoting shared services was also prominent on the FY2020 agenda.

Kent also previewed an announcement expected for later today about two new Technology Modernization Fund awards. She did not tip her hand as to which agencies won the funding awards, but said that work under the awards will replace paper-based processes, including one that involves triplicate forms. “I don’t even know where to buy those anymore,” she quipped, adding, “I don’t see them at Staples.”