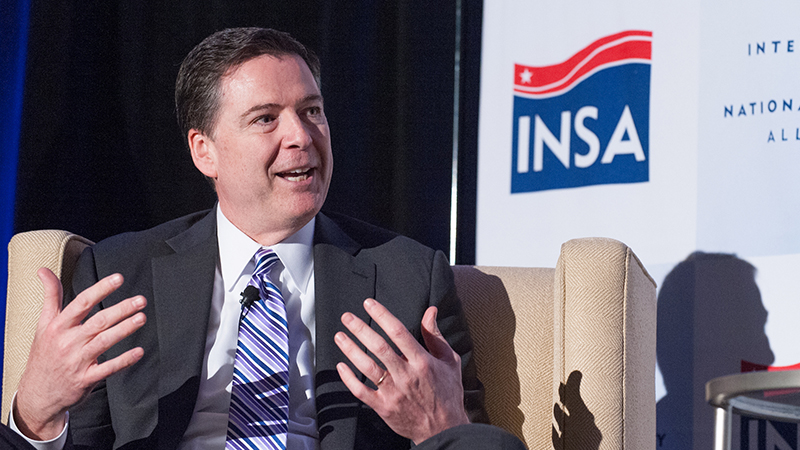 The organizational changes flowing around in James Comey’s head aren’t new or revolutionary. But they are for the FBI, and they could fundamentally alter what it means to be an FBI agent.

The changes are in line with experiments already underway at the Defense Department and the NSA—encouraging agents to spend time working in the private sector, bringing in private sector experts to perform tours of duty inside the bureau, and potentially building an internal university to develop the future cyber talent the FBI needs now and in the future.

“Should we make the barrier between us and the private sector semi-permeable?” Comey pondered during a keynote presentation Wednesday night at the Intelligence and National Security Alliance’s Leadership Dinner. “Our minds are open to all of these things.”

With six years left in his tenure as FBI director, Comey has already kick-started a transformation effort that firmly embraces the digital changes swirling through the ranks of what is arguably one of the government’s most insular cultures. First and foremost among those transformation efforts is the way in which the bureau assigns cases. The modern digital age has completely obliterated the traditional concept of assigning cases to the nearest FBI field office. The physical manifestation of a crime or terrorist event “isn’t all that meaningful” in the age of the Internet and nation-state sponsored cyber espionage.

But the FBI “is not blind to physical manifestation” when it comes to criminal investigations, said Comey. Although the bureau assigns the threat to the appropriate talent, up to four other field offices are often enlisted to play supporting roles. One such office is known as a Strat office (for strategic) and the other type of office is referred to as a Tac office (for tactical).

“And then we [conduct] air traffic control from Washington,” Comey said. “This has had a great effect inside the FBI because it has fostered an intense competition among field offices to generate and demonstrate the talent against various dimensions of the threat.”

From a recruiting standpoint, the bureau may also need to open its mind to FBI agents who don’t carry weapons. Comey acknowledged the challenges the bureau faces when it searches the cyber talent pool for individuals who not only present specialized technical talent but must also be physically fit enough to “run, fight, and shoot” and be a person of high integrity.

“That collection of attributes is rare in nature,” Comey said.

“So we stare at the pool of talent and we have two reactions to the pool. We can’t compete on money. You in the private sector have more money. We acknowledge that to the people we are trying to recruit. But then we also make sure that they understand life with you is soulless and empty,” he said, to lots of laughter.

Kidding aside, Comey did raise some serious questions about what the future FBI agent might look like. “Do we really need gun-carrying agents making up an entire squad?” he asked. “Now we have squads of eight around the country. Should we instead have two special agents and six something elses?”