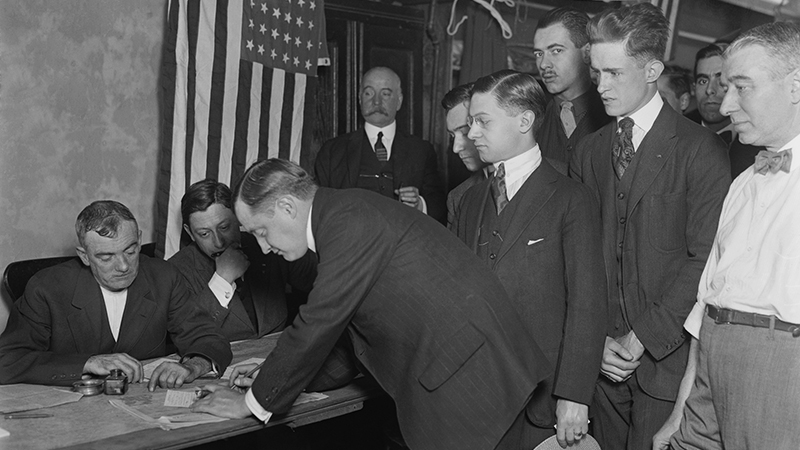 If you are or ever were a male between the ages of 18 and 25, then you’ve heard of the Selective Service System. For those of you who don’t know what I’m talking about, that’s the independent Federal agency tasked with managing the registration of all males eligible to be drafted into the military during times of national crisis.

But the Selective Service today is a far cry from the system that was first started in 1917 during World War I in Europe. The world has evolved from trench warfare to cyber warfare and, as a result, the guiding principles behind how the nation encourages national service and the extraordinary process of drafting military-age males into service during times of war are evolving as well.

In a virtually unnoticed message to Congress this month, President Donald Trump outlined his new guiding principles for reforming the Selective Service process, as called for by the 2017 National Defense Authorization Act. And the Trump approach calls for a renewed focus on “critical skills.”

America hasn’t relied upon the draft since the Vietnam War. For the past 44 years, the nation has benefited from the development of a professional military of all volunteers with a wide variety of professional skills and life experiences. But the world is arguably more dangerous today than at any other time during those 44 years, and the threat of miscalculation leading to a major global conflagration—from nuclear war on the Korean peninsula to major power conflicts in Europe and Asia—is increasing.

But just as the nature of war has changed, so have the needs of the military. In the unlikely event of a future draft, the Trump administration is advising the Selective Service “to create pathways through service that leverage enhanced, empowered, and experienced expertise across the spectrum of science, technology, engineering, mathematics, national security, cyber linguistics and foreign language, education, health care, and the medical professions,” according to Trump’s report.

It’s unclear, however, if Trump’s guidance would lead to a more capable high-tech military in the event of a draft. The U.S. military is already more highly educated than the population in general, holding a higher percentage of bachelor’s degrees and high school diplomas. In addition, former Secretary of Defense Ash Carter once complained that half of the 21 million Americans aged 17 to 21 were unable to meet military entrance exam requirements.

The situation gets worse. Federal and state data shows that more than 25 percent of all college freshmen in the U.S. require some form of remedial coursework. At two-year community colleges, that percentage can be as high as 60 percent. American students just aren’t keeping up with the world around them. That may spell problems for U.S. competitiveness, but it very well may spell catastrophe for U.S. military effectiveness on the high-tech battlefields of the future.

Is there a bright spot in the government’s plan to make military service more attractive to STEM graduates? Yes. Silicon Valley is notorious for pulling jobs out from beneath the feet of young graduates. Tech companies have eliminated more than 413,000 jobs since 2012, including 96,000 just last year. Annual job growth in Silicon Valley decreased to 3.5 percent, or 26,700 new jobs, in 2016. This compares to the 6 percent annual gain of 42,300 jobs in 2015, and the 6.4 percent gain in 2014.

Of course, not all tech companies have been cutting back. IBM CEO Ginni Rometty, for example, said she plans to hire 25,000 tech pros in the next four years. But if the world keeps spiraling out of control, Big Blue may have to wait for most of those people to finish their tours of duty.