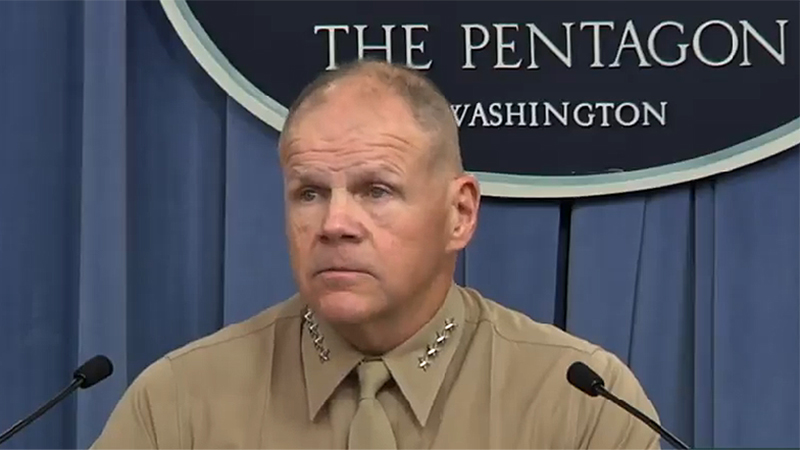 My Marine Corps has a problem. And it isn’t about social media, how long it will take male Marines to accept women in the ranks, or how Marines “treat each other” off the battlefield.

No, the recent scandal involving the Facebook group Marines United–a secretive, invitation-only group of current and former Marines that has shared compromising photos of female Marines without their permission—is a symptom of deep cultural bias that has always directly targeted women and has been enhanced by the rise of social media.

This is why the response of the Commandant of the Marine Corps, Gen. Robert Neller, has been so disappointing. By constantly referencing “fellow Marines” and “social media policy” instead of extreme bias against women, he deflects from the real issue.

“I mean, c’mon guys. They just want to do their job. Let them do their job,” Neller said during a Pentagon press briefing when the scandal first broke.

Today, the Commandant of the Marine Corps addressed recent allegations of cyber misconduct, and how it hurts the team. pic.twitter.com/AQifcMeUtG

Shortly after Neller’s appearance at the Pentagon, the Marine Corps referred to the problem as “cyber misconduct”—another clear attempt to deflect from the real, much more difficult problem of violence against women.

The deflections continued, reaching as far as the House Armed Services Committee on March 21 when the Military Personnel Subcommittee held a hearing on the “Social Media Policies of the Military Services.” For a few minutes, it appeared as if the deflection had worked. The media seating area in the committee hearing room was virtually empty. Military.com reporter Hope Hodge Seck captured the scene in a tweet from the hearing.

Press section at hearing on social media in wake of Marines United scandal. How soon they lose interest @bkesling pic.twitter.com/lCqjzCupto

But one lawmaker saw through the ruse. Rep. Jackie Speier, D-Calif., blasted the committee during her opening remarks for not tackling the real issues at stake.

“I have to say, I’m very disappointed in the topic of this hearing,” Speier said. “Framing the issue as military social media policies frankly misses the point. No one has ever gone on Facebook, looked at nonconsensually posted intimate photos, typed a rape threat, and then stopped and said, ‘Oh, I better not make rape threats! That’s against the military’s social media policy.’ ”

I asked James LaPorta, a fellow Marine and one of the journalists who helped uncover the activities of the Marines United Facebook page, what he thought about the constant deflections and what I see as an unwillingness to address the issue of violence and bias against women. His thoughtful response raises even deeper questions about the root causes of the problem now infecting the entire military.

“Social media policy is only one step to addressing this problem and let’s be realistic, this issue of exploiting women online will not completely be eradicated,” LaPorta said. “I think this issue stems mainly from decades of military culture, alienation between genders that’s more than just the debate of women in combat, but even how the different genders are tested and promoted.”

As LaPorta rightfully points out, there are a lot of issues that feed the root causes of the sexism that reared its ugly head in the form of Marines United. It is up to senior military leaders to now confront the problem head-on without deflecting the public’s attention away from the cancer that is violence and bias against women.

“I’m not sure the problem can be solved,” LaPorta acknowledged. “I hope that it could. The only thing I know is that somewhere along the way, members who engaged in the exploitation of women lost their sense of decency. Perhaps that’s a failure of leadership, a failure of institution or family, but at some point it’s the individual that needs to be held accountable.”

The latest public relations effort on Twitter by the Marine Corps involves a speech by Sergeant Major Brad Kasal that focuses on the rightful place in history earned by generations of Marines—male and female—and reinforces the ethos that stands like a steel rod behind the words Semper Fidelis.

“Can you trust your fellow Marines, and will they be there for you? That is all that matters.” — Sgt. Maj. Brad Kasal pic.twitter.com/SDmyR4kNBY

But let’s be honest. As much as the Marines United scandal isn’t about social media or cyber misconduct, it also has never been about the performance and faithfulness of Marines on the battlefield. It’s time to stop deflecting our attention away from the real problem.